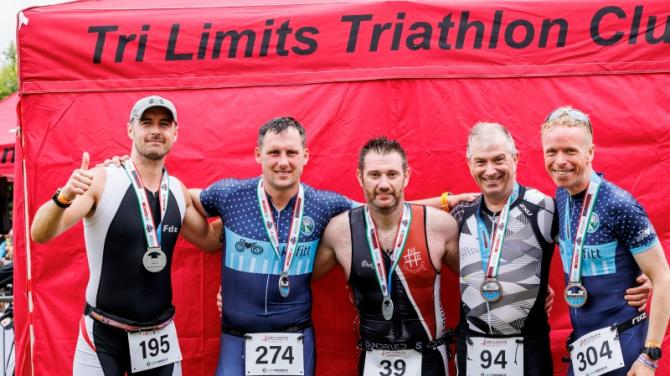 STRABANE Triathlon Club made their official race debut on Saturday in Dungannon after competing in the 70.3 National Championships.

The new club, which was formed this year, had five members taking part.

With an early start time, the team made the hour long journey to Lough Eskragh to line up against some of Ireland’s best triathletes in a race which consisted of a 1.9km swim, a 90km bike before finishing with a half marathon run.

After all the pre-event registration was complete, it was time to begin the challenge.

The team had a successful swim, navigating the two laps around Lough Eskra before making their way onto the bike course which followed the old road from Dungannon to Ballygawley.

The Strabane men managed to sustain their efforts on the bike course despite a strengthening southerly breeze and persistent rain.

Once the bikes were securely racked in transition, the Strabane triathletes embarked on the final leg of the triathlon, the half marathon run which required plenty of physical and mental strength, after several hours of exertion.

The team put in a solid final effort on the run course before crossing the line to finish the race.

Full results from the race can be found here: https://my.raceresult.com/212811/live

A club spokesperson said: "A huge well done to all of the Strabane triathletes for making it to the finish line, with a special thanks to all of the supporters who cheered us on along the way.

"Finally, the club would like to thank our sponsors, AP Recovery and Conway Plumbing, for their generous sponsorship, ensuring the event was a huge success.

"The club’s attention will now switch to our next race in two weeks where Joe, Conor, Brian, Brendan and John will be competing in Tri the Lough sprint triathlon at Loughmacrory on Saturday, August 6."