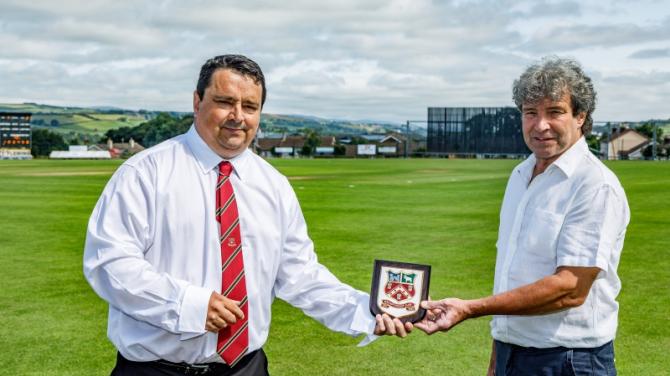 PRIOR to Saturday's Over-40 league victory over St Johnston, Bready's club chairman, Norman Allen, presented the McConnell family a plaque of the new restructured club crest which was in created in memory of their father Sam who served the club so well in various roles.

A presentation was made to Sam McConnell Jnr who designed both the original crest and the restructured crest.

The new club crest is dedicated to Sam McConnell Snr, who played a huge part in the club's history and helped to raise tens of thousands for numerous local charities.

The new crest captures the club’s history and the various grounds it has called home since its formation in 1938.

The new design includes symbols which relate to the townlands of Tamnabrady, Cloghogle, Meenagh Hill, Tamnakeery and where its home is now, straddling Magheramason and Coolmaghery.

Mr McConnell moved to Bready after a brief flirtation with Mountcastle and Dullerton in his early cricketing years. His roles at Bready were many, serving the club as a player, a chairman, part-time groundsman and club secretary, an office he took up in 1967 and was to hold it for 36 years.

"Sam worked tirelessly for the advancement of the club,” said a club spokesperson.

“He liked nothing more than seeing young cricketers make their way up through the ranks and shared in their success when they made it.”

Aside from his beloved Bready, he was also a long time servant of the Derry Mid Week Cricket League which he also joined in 1967, serving as chairman before retiring from therole in 2002.

He had a great pride in the work of the Derry Mid Week, not only in its development of young players and mid-week cricket in the North West, but also their work in raising money for local charities.

In the year prior to his death the DML presented cheques totalling close to £5,000 to over 20 local causes, bringing the total raised in the previous 20 years to over £90,000.

In 2002 he was presented with the Strabane Weekly News Sports Personality Award and inaugurated into their Hall of Fame.

Mr McConnell was also actively involved with the North West Cricket Union having attended the last 60 Senior Cup Finals prior to his death – the vast majority of them in some formal capacity – and in the last 15 he worked the ‘gate’.

In 2008 the NWCU presented him with an award to mark his lifetime of service.

A member also of the North West Umpires Association he served for 32 years, two of which as chairman and eventually becoming resident, an office he held until his passing in 2014.

"He umpired his first North West Senior game in 1975 from which he retired in 2006 stating the highlight of which was umpiring the 1986 Senior Cup Final with John Doherty as it was the first time in the history of the competition that two men from the same club stood in the same final,” the club spokesperson added.

"Sam was an inspiration to us all and we as a club, wanted to pay tribute to him and the work that he has done not only for Bready CC itself; but for the cricket community here in the North West.”

“We have collectively decided as a club, that there would be no better tribute for Sam, than to restructure our club crest in his memory,” he continued.

“We have worked on this project for a while in conjunction with Sam’s eldest son, Sam McConnell Jnr, who has carried out a lot of historical research, trying to achieve a fresh, new look that captures Sam’s lasting legacy, whilst incorporating the club’s journey in the new club crest which all areas of the community can relate to.”

For more photographs and coverage of Bready’s victory over St Johnston, see page 39.