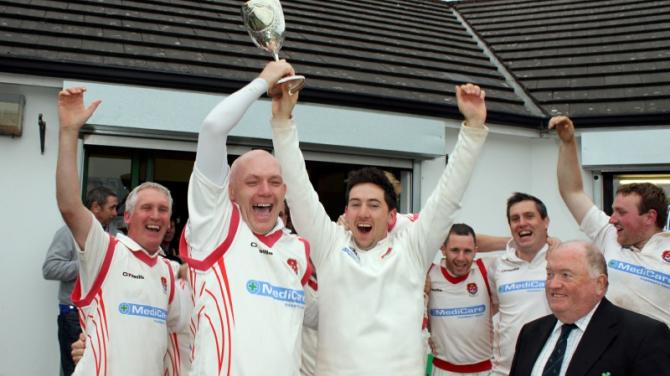 BACK in September 2014, Strabane Cricket Club claimed their third senior championship in just six years with a nerve-jangling victory over Ardmore at the Bleachgreen.

The final fixture of the regular season went right down to the wire before Ryan Patton bowled Gerard Brolly from the penultimate ball of the match to bring the senior title back to Strabane Park.

Peter Gillespie won the toss but must have been sorley tempted to send the hosts in on a turning track and after the first 10 overs he probably wished he had.

Matt Bentley, Kevin Martin, Aaron Gillespie and Ryan Gallagher all went early as the bowlers got on top and batting looked treacherous. Order was restored by the Gillespie brothers- Peter and Mark- as they added a priceless 48 before the former was bowled by Ryan Brolly for 26 off a ball that never lifted an inch.

That gave Ardmore another sniff and although Mark Gillespie was playing superbly, wickets continued to tumble. It took a 39-run stand between the left hander and club captain Tommy Barr to take the Red Caps over 150, Gillespie finally out for 65 (9 fours, 1 six) as Strabane closed on a competitive looking 163.

Ardmore struggled just as much when they took their turn to bat with Ciaran Curley and Adrian Murphy both falling cheaply. Paul Brolly and Decker Curry moved things on a little but the game changed shortly afterwards when Ryan Gallagher bowled Curry around his legs for 9.

Peter Harrigan came and went too and Brolly then battened down the hatches as he and nephew Ryan gave Ardmore renewed hope. Scoring was painfully slow however and after 25 overs the home side had knocked off just 53 of the required runs.

It was Gallagher again who split the pair up having Conor well caught by Matt Bentley for 20 and when Gary Neely followed moments later the game looked up. Paul Brolly's resistance ended when he was caught by Jonny Robinson off the accurate Gallagher for 31 but Murphy's men kept at it as Conor Brolly took up the fight.

He and Sean Gormley took their side to within 9 runs of a win before Ryan Patton took an excellent catch on the boundary to end Conor's valiant knock of 38.

That left Ardmore needing 7 for a tie from the last over however Ryan Patton still had one up his sleeve. Patton's economy rate has been excellent this summer and his side couldn't have hoped for a better final over as he had Gormley stumped off the first ball and then restricted the batsmen to just a single from the next three.

Only a six would do at that point and Gerard Brolly gave it both arms however Patton was to wheel away in celebration as the off stump was knocked over instead.

A thrilling game and a thrilling victory ending with a thoroughly deserved 15th title triumph for Strabane.