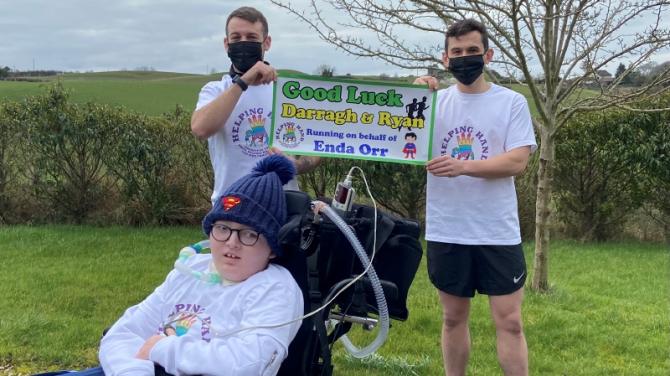 INSPIRED by a 14-year-old boy from Newtownstewart, two thoughtful and talented runners completed a gruelling 48-hour fundraising challenge at the weekend.

Darragh McGuigan, from Omagh, and Ryan Doherty, from Strabane, successfully took on the ‘4x4x48’ run in aid of the Royal Belfast Hospital for Sick Children, whose staff have provided wonderful care for teenager Enda Orr over many years.

The challenge involved running for four miles every four hours for 48 hours. During this time, Darragh and Ryan spread their runs across the district, taking in Omagh, Loughmacrory and Strabane before finishing their epic journey outside the home of Enda in Newtownstewart.

Already they have raised over £5,000 for the Helping Hand charity to show their appreciation for everything the staff and personnel have done in the Royal Belfast Hospital for Sick Children, especially over the past few months whilst Enda was in PICU.

The Helping Hand charity was established to provide the best equipment, to fund research, education and to support the immediate needs of children and their parents at the Royal Belfast Hospital for Sick Children.

Enda - who attends Knockavoe School, Strabane - was admitted to the PICU at the Royal Belfast Hospital for Sick Children in late August with a severe lung infection which meant he had to be placed on a ventilator.

He remained on the ventilator for almost six months until he had to eventually have a tracheostomy fitted which enabled Enda to eventually leave PICU and return home, but still with the support of a portable ventilator.

“During the period in PICU, Enda received what could only be described as first-class treatment from the entire team of consultants, respiratory specialists, nurses, doctors, physios, who tried every avenue to get Enda to where he is today - home with his family,” his father Gary explained.

"They went above and beyond to get Enda home and this prompted Darragh and Ryan to try and show their appreciation for his care. Their goal was to raise as much as possible for the specialist unit which always needs to add new equipment and supplies for present and future children who may need the remarkable services of the PICU in Belfast. It's great to be able to present this money to the staff at the hospital.

“Enda has been treated at the Royal over the course of his life, but this was his longest time yet in the hospital. We just wanted to give something back to them.

“From Enda's extended family, we are eternally grateful to the hospital and very proud of Darragh and Ryan's efforts on our behalf.”

Darragh and Ryan's challenge started on Friday morning and concluded on Sunday outside the home of Enda.

"It was great the way they did it," continued Gary.

"Enda was waiting at his front door as they finished. It meant the world to him."