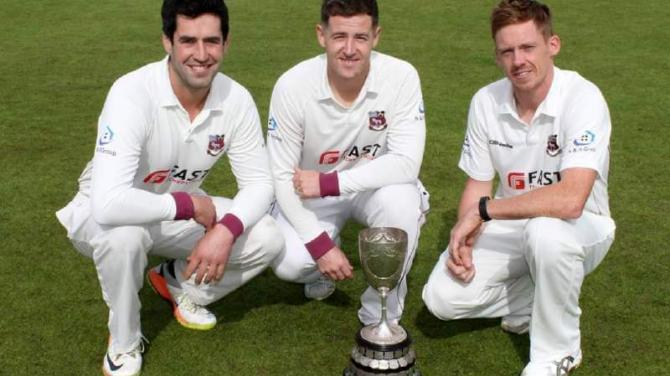 BREADY Cricket Club made history in August 2018 by capturing the North West League title for the first ever time in its history.

The local club, led by David Scanlon, suffered defeat to Brigade but managed to collect the point needed to seal the league trophy on Sunday, August 11.

This week, the Strabane Weekly News reached out to Scanlon to gather his thoughts on that momentuous day for the club and area.

“It was really special to lift the cup, especially with friends I grew up playing cricket with,” he said.

“That was the biggest thing for me. To get over the line and to do it for the club’s first time in 80 years was massive.

“Being the captain of the side was a big thing for me. The senior players really stood up that season, so that was really pleasing. We were also able to introduce a few younger players, and to give them a taste of winning the North West League was brilliant.

“To finally win something that the club has never won before was special - it was the last one I hadn’t won in North West competition.”

League success finally got the proverbial monkey off the club’s back.

“Speaking to older members of the club, they were just as delighted as we were,” continued Scanlon.

“Everyone had gone through that period of nearly getting there, but never quite managing it. So to do it for them and get over the line was amazing.”

It’s an occasion that Scanlon often looks back on.

“To look back at the photographs and see all the smiles on faces, especially from the older supporters, was brilliant,” he said.

“It’s always great to look back on those times, especially during this period of lockdown.

He admits it took some time for the success to sink in, such was its enormity.

“We have won cups at Bready before, but this definitely took some time to sink in due to the fact that we won it with a young side,” Scanlon said.

“We had a blend of young and older players, and the senior guys such as Davy Rankin, Craig Young and our professional Irosh Samarasooriya.

“It was really pleasing for me that players like Andy Austin, Gregory McFaul, Ross Doc’, Conor Olphert, Andy Lucas and Ryan Barr had a massive influence on winning the league for Bready.”

It was not the best Bready team, Scanlon said, but it did boast the most heart and drive.

Asked to single out the most influential players of that season, Scanlon responded: “You can’t look past Davy Rankin, Craig Young and our professional Irosh Samarasooriya.

“It was Irosh’s second year here so he had settled in well. Along with myself, those three players guided the younger boys through.

“But everyone chipped in to get us through certain games.”

The day Bready won the trophy ultimately proved to be a bittersweet occasion for Scanlon, though, as he was whisked off to hospital immediately after the Brigade game.

“It was a double header that weekend,” he recalled.

“We beat Coleraine on the Saturday in a tight game, and we knew we would only need a point to get over the line against Brigade.

“We needed 134 to get the bonus points to win the league. We could have done it the week after, but to win it at Brigade made it even more special because they were our closest rivals at the time.

“Their captain Andy Britton is one of my close friends, but on the field we are quite rivalled against each other. For years we had been battling on the fields between clubs. So it was quite good to win it there!”

He added: “It was a Sunday, so we knew if we won it there wasn’t going to be a massive party that night.

“At the time I thought I had a hernia that ruptured, it was causing me bother throughout the season, but I played on.

“When I went to hospital, they agreed. It put me off my feet a couple of days, so sitting in hospital wasn’t the best way to mark winning my first league title.”

Unfortunately, Bready weren’t able to build on their title success and finished third the following season.

“We lost two of our key performers in Craig Young and Ryan Barr, who moved off to pastures new,” continued Scanlon.

“It was quite hard to lose our international fast bowler and Ryan Barr, who helped us win numerous games.

“We brought more young players into the game, so as soon as we won the title we were rebuilding again, like we have always done.

“We are a club that prides itself on bringing youth through.”

Scanlon is confident the future is bright and the club can once again compete for the game’s biggest prizes.

“We have a good group of 15 and 16-year-olds who can push on and hopefully, if we can get playing again, we will be up there competing for silverware.”