Goalfest at Melvin as Strabane put 12 past Trojans 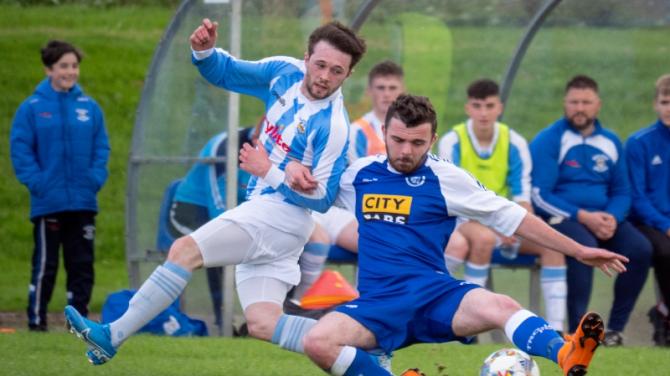 THE first round of the NI Intermediate League Cup saw Strabane entertain Trojans at Melvin Arena on Saturday.

The visitors brought a very young and inexperienced team and this was reflected in the final scoreline.

Strabane put the Derry side under pressure from the kick-off and the opening goal came after ten minutes as Warner Mullen tapped in a parried cross from Kyle Harte.

Minutes later, after Doherty drew a fine save from Moore, Mullen put Sean Ferry in for a neat finish.

On 25 minutes Ferry chested the ball to Doherty who shot narrowly wide. Ferry himself doubled his tally after some forceful play. Now trailing by three, Trojans struggled to contain the home team.

Porter saw a curling shot go wide before Ferry latched on to a great pass from Mullen and clinically finished for his hattrick on the half hour.

Mullen was thwarted by a good defensive tackle and from the resulting corner, Gary Henderson headed home from close range for Strabane’s fifth.

McGowan in the home goal was having a quiet day but was called on to pull off a fine save from a rare Trojans attack.

After a nice one-two with Ferry, Mullan notched his third and just before the half time whistle he added his fourth to leave the visitors trailing by eight.

Strabane made three changes at the interval, McShane, McGrath and Bishop were introduced for Harte, Forbes and Henderson.

On the restart, Trojans tried to play with a bit more purpose, but on the hour mark Cairns rolled in Strabane’s ninth. After 65 minutes, Mullen confirmed his ‘man-of-the match’ performance as he controlled a great cross from McShane to take the home side into double figures.

Strabane’s defence was well marshalled by McMenamin with Porter working well in the middle and McBrearty on the flank.

Just after Trojans had scored a consolation, Ferry slid home his fourth and with five minutes remaining McShane again provided a fine ball for Cairns to score his second and Strabane’s twelfth .

On reflection, the game probably did not provide a stern enough test for Strabane but they did play with confidence and fluency and were allowed, by virtue of the youthfulness and inexperience of the visitors, to express themselves and were worth every one of their dozen goals.