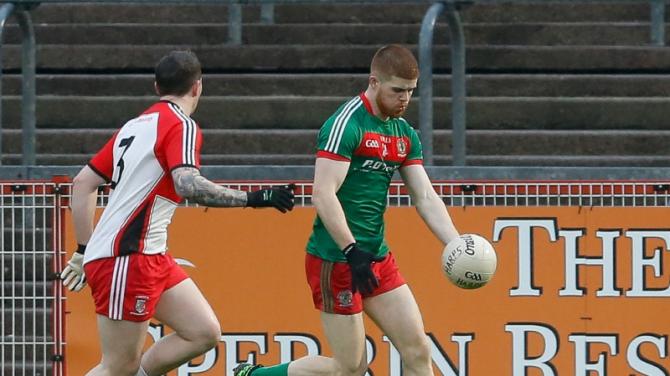 The flame-haired attacker hit ten points as the north Tyrone men comfortably progressed to the quarter-finals in a dominant display at Healy Park.

They led by 0-10 to 0-2 at half-time, and despite a Gareth Devlin goal, steered a steady course to the finish line with some impressive offensive plays.

Seamus Dooher shot the opening point in the fifth minute as they dominated possession in the early stages, with the wind in their backs.

Midfielder Tony Devine was a driving force, whiel wing backs Conall McCormick and Damian McCrossan pushed forward with purpose, and they extended the lead with a Cathal McShane free.

Stewartstown got their opening score from a Gareth Devlin free in the 11th minute, but they were soon defending again against at attack-minded Owen Roes side.

Dooher found acres of space to slot over his second, and McCormick added another, before Conor O’Neill made it 0-5 to 0-1 by the 20th minute.

Stewartstown lost influential midfielder Macauley Quinn to injury, and managed just one more score in the opening half, with Dan Lowe collecting Conor Quinn’s searching delivery to offload to Cathal Devlin for a neat point.

And in the latter stages of the half, Owen Roes tightened their grip on the contest, hitting five more scores before the break.

Long range efforts from Stephen Harper and Ryan McAleer were followed by a brilliant McShane effort, as he collected Damian McCrossan’s delivery to round his marker and stroke the ball between the posts.

Stewartstown sere restricted to sporadic attacks, but almost got in for a goal when Lowe rounded his marker to fire in a low shot, which ‘keeper Andy Devine deflected around a post.

Two more McShane efforts sent his side in with a commanding 0-10 to 0-2 lead, and he added another brace early in the second half.

But the Harps did grab a goal in the 40th minute, gaining possession from a hop-ball for Gareth Devlin to bury his shot in the bottom corner of the net.

However, that score failed to spark the fightback that Stewartstown so badly needed, and a confident Owen Roes side got back on the attack to reel off another volley of scores, all five of them from the outsanding McShane.

As he raced clear to go one-on-one with ‘keeper Greg Kelly, a goal looked certain, but the full forward opted to take his point.

Stewartstown rallied for Paul Dillon (free) and Niall Dillon to pull back points, but this was to be a triumphant evening for Owen Roes, who finished strongly with Seamus Dooher landing his third point of the contest.