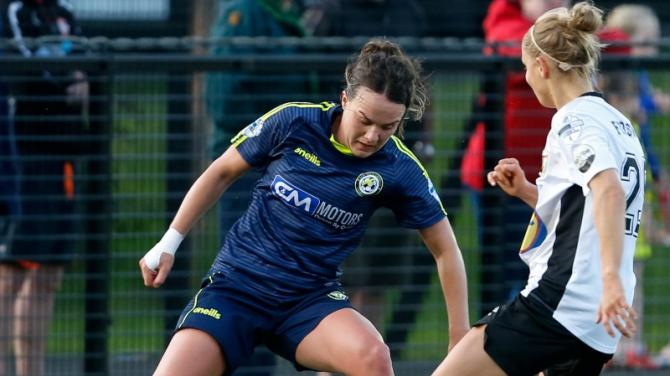 SION Swifts Ladies will keep fighting to the bitter end as they attempt to clinch their first ever Women’s Premiership title.

That much was evident on Sunday when they battled back from two goals down to earn a point at reigning champions Linfield and stay top of the league by a single point.

Cruelly, however, the Tyrone side’s fate is now ultimately out of their hands, as Swifts have played a game more than their bitter rivals.

While Sion can claim a maximum of nine points from their last three games, Linfield have the potential to record 12 and must be confident of retaining the trophy.

Swifts boss Tony McGinley, who was devastated his side couldn’t find a late winne in Belfastr, believes his side will win each of their remaining games, but accepts that toppling Linfield will be incredibly difficult at this late stage.

Rebecca Bassett gave the Blues a seventh minute lead following a free-kick from captain Kirsty McGuinness in the only big opportunity in the opening period.

Six minutes after the break, the hosts doubled their lead when a fantastic reverse pass from Chloe McCarron put skipper McGuinness through on goal and she brilliantly lobbed Sion goalkeeper Nicole McClure to double the lead.

On 62 minutes Sion were right back in the game when a spell of pressure ended with a ball played across the face of goal being tapped in by Amy Boyle Carr, giving home goalkeeper Lauren Perry no chance and making the score 2-1.

With 10 minutes remaining, Sion levelled the score when the ball ran loose for Ciara Grant to slide the ball home for 2-2.

The Blues were reduced to ten players in injury time when Linfield’s Louise McDaniel received a second yellow card.

Both teams had half chances to steal the points but the game ended 2-2, leaving Sion a point clear of the Blues but having played one game more.

“Not many teams could battle back like that against Linfield,” said a proud McGinley.

“Two-nil down away to Linfield, you see many teams lose four or five.

“At that stage of course I would have taken a point, but we completely dominated the last 25 minutes, and I'm not really satisfied with just a draw.”

McGinley admits he is disappointed the title is now out of his team’s hands.

“Our changing room after the game was one of devastation, which shows how far we have come. In terms of effort, passion and desire, I couldn’t have asked for anything more.

“Their energy levels are something else and for us to dominate Linfield the way we did, in their own back garden, was an absolute credit to our club.

“We are disappointed, yes, but very, very proud.They couldn’t have given anything more. It just wasn’t to be on the day, but that’s football.”

Linfield have a relatively straight forward run-in, but the visit to rivals Glentoran on Saturday, September 14, has the potential to be a very tricky afternoon.

“It is difficult to know how that will go - it all depends on which Glentoran shows up and how they approach it,” said McGinley.

“Look, it’s out of our control now. The most important thing is that we win our remaining games, so that if Linfield do slip up, - and I am worried that they won’t - we are there to take full advantage. We have got to do our job and that’s what we will be focusing on. I have full belief in this team.

“I’m confident because of the quality my team has - they will give everything they have to take nine points out of the last three games.

“This team has been unbeaten since the first game of the season and that’s a massive achievement at this level. Considering the players we have lost, for various reasons, it is remarkable. There is no other club in this country that could sustain a title race having lost the number of players we have.”

A thrilling season comes to a climax on Wednesday, September 25.

Sion Swifts host Cliftonville on September 4, followed by an away game at basement side and winless Comber Rec on September 11, the same day Linfield entertain Cliftonville. The Swifts conclude their season at Derry City seven days later.

As well as Cliftonville, Linfield travel to Glentoran on September 14, followed by a home game against Comber Rec four days later and they also round off their season with a visit to Derry City a week after Sion play their rivals.