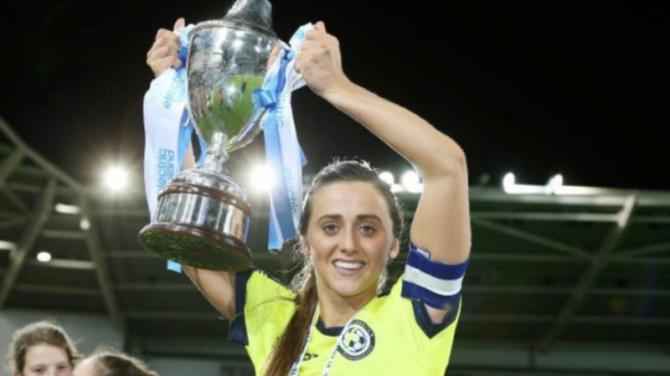 SION Swifts Ladies have announced that their inspirational captain, Kendra Semple McMullan, has retired from football.

News of the 26-year-old’s shock decision was announced by the club in a statement issued on its social media on Monday.

Kendra has fulfilled the role of captain of the North Tyrone side for the past seven years and her departure is sure to be a huge loss for a team chasing an historic first Danske Bank Women’s Premiership title.

The club’s statement read: “We are saddened to announce the retirement from football aged 26 of our captain Kendra Semple McMullan.

“Not only is the news an enormous loss to our club but also to the Danske Bank UK Women's Premiership and football in general.

“Kendra has been the captain of our club for the past seven seasons since arriving here from the now defunct YMCA Ladies side.

“Driving her side forward was the Kendra we will remember helping us from Division Two to the Premier League and who will ever forget that famous night in the National Stadium in September 2017 when Kendra's two goals sealed our first and only major trophy at this level.”

The club said injuries, the latest a season ending one during the recent clash with Glentoran FC, had played a part in her making the “hardest decision of her life”.

“No one worked harder or fought harder to recover from these setbacks than Kendra but the latest one is one too many with a final diagnosis awaiting,” the statement added.

The Swifts number seven jersey will now be retired for the remainder of the 2019 season.

“Thank you for absolutely everything skipper. You certainly made your dad a very proud man,” the statement added.

Speaking of her decision, the 26-year-old said it was the “most sensible” one for her.

“I’m lost for words on how I’m feeling right now but one thing is that I am thankful for the many great, happy, enjoyable and also memorable years of football I’ve had both at club and country from a very young age,” she said.

“I know during my time with Sion I have tried to give everything and more than I had in my body, both on and off the pitch, for this club, and it has always been a complete honour for me to have been captain of this wonderful team.

“Tony McGinley, I thank you for believing in me to have taken on this role from my first year at the club and I hope I done you proud – just like how I felt leading this team out every week.

“With everything in life, you have your ups and you have your downs, but I can’t thank Tony, Tommy Canning, the girls and everyone at Sion enough for helping me through the tough times with injuries lately but also for everything during my last seven years here.”

She added that she had made “wonderful memories” during her time with Swifts and had made friends for life.

“Although I won't be on the pitch for the remaining games of our season, l will still be doing all I can for everyone.

“This club is a special one and it always will be for me. Honestly thank you all for everything from myself and my family. There is no better group of girls or management than these ones,” she added.

As a mark of the esteem the dynamic midfielder is held in, messages of goodwill, including many from rival clubs, have continued to pour in wishing her well for the future with many lamenting the loss of an “inspirational” footballer.