Donemana racer Dunn has to settle for runner-up spot 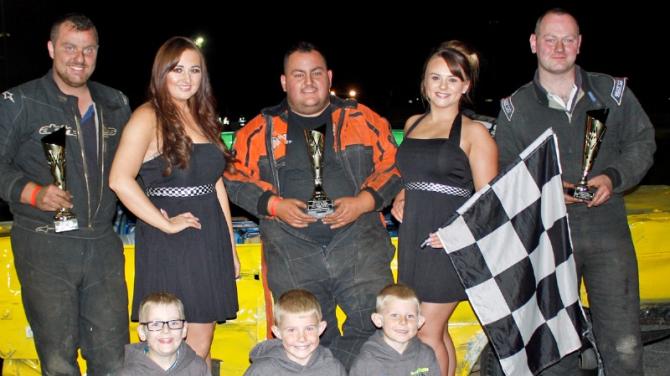 AN excellent field of Unlimited National Bangers came to trade blows in the Kings of Krash team event, with lone ranger Steven Bolton taking first blood for himself with the heat one win racing as Team TBG. Anthony McIvor took a huge hit into turn one courtesy of Stevo McGrath as there was action all around early on. McGrath came home in second for Team Sour ahead of Bad Company’s Leonard Dunn, of Donemana.

Heat two saw yet more heavy action on turn three with Jonathan Compelli, Kieran McIvor and Jonny Murdock amongst those involved. Dunn came through for the win this time ahead of McGrath and another Team Sour racer, Adam Maxwell.

The double points final was always going to play a huge part in the overall standings, and despite the best efforts of the chasing Dunn, it was McGrath who raced home to the win to secure the overall title for Team Sour. With the overall points decided before the Destruction Derby, it turned into an excellent free for all with Paul Compelli going for a rollover on the back straight just as his brother Jonathan took a huge home straight hit from Davey O’Connor.

The reds came out to rescue Paul who was thankfully unscathed, and at the restart a huge wrecking train kicked off on the home straight involving some huge hits from Stephen Boyd, Rocky McKenna, William Bingham, Darren Gaffney and Noel Anderson.

Donemana man Dunn avoided the carnage to take the victory, whilst Gaffney was awarded Entertainer of the Day and Jonathan Compelli took home the Best Wreck Award. Overall Team Sour A were victorious ahead of Bad Company A and Bad Company B.

The next race meeting at Tullyroan Oval is on Saturday, September 7, from 6.30pm, featuring the second round of the Simpson Race Exhausts World Series NI for National Hot Rods, the Grand Final of the Percy Auto Body Repairs Challenge Series for Lightning Rods, The second round of the Superstox NIOvalTV Series plus Rookie Bangers and ProStocks.