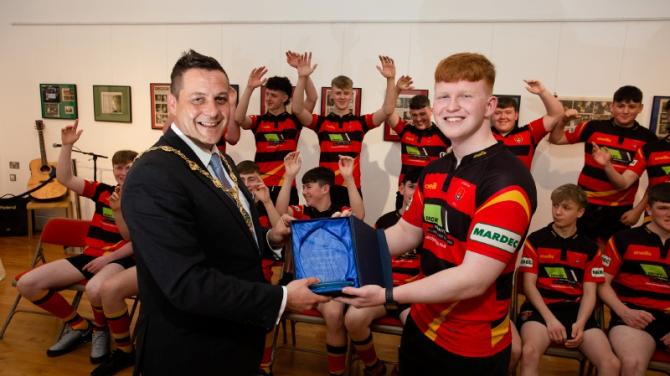 MAYOR of Derry City and Strabane District Council, Alderman Graham Warke, has held a special reception for the Ulster plate-winning Strabane Rugby Club U16 side.

The team defeated Cavan in the final to claim the title and Mayor Warke marked the achievement with a mayoral recpetion at the Alley Theatre.

Mayor Warke said: "​It was brilliant to host a reception for the young men from Strabane Rugby Club to mark their achievement of winning the Ulster Plate competition.

"This is a huge moment not just for these players in their own sporting careers, but for their coaches and their whole club as well.

"The final whistle of their game against Cavan was greeted with huge cheers from their supporters and it shows just how much this means for Strabane Rugby Club as they continue to go from strength to strength.

"These young men are inspiring a new generation of boys and girls coming through and I wish the team and everyone at the club all the best and continued success for the future."