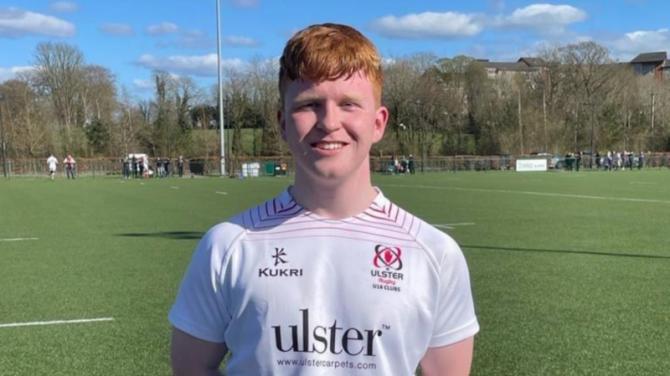 STRABANE Rugby Club player Tom McGilloway has earned his first cap for the Ulster U18 squad.

Fresh from lifting the Ulster U16 Plate following their victory over Cavan last month, the club was delighted to reveal that the talented hooker had been selected to play in Ulster's Inter-pro clash against Munster in Limerick.

Tom came on as a substitute during the encounter on April 9.

A spokesperson for the club said: "Strabane Rugby Club would like to say a huge congratulations to our under 16 player Tom McGilloway on winning his first cap for the Ulster Rugby Under 18s club team.

"He came on as substitute hooker and got over 20 minutes of rugby against Munster in Limerick and did himself proud.

"Tom only started playing four years ago, encouraged by his father, Brian McGilloway, a local teacher and crime writer, who took on the taxing role of team coach, to help his son develop.

"This has turned out to be a true fairytale story but the only magic involved has been the tremendous amount of hard work and commitment the McGilloway's have put in to get Tom to where he is today."

Tom is the first Ulster Strabane player since 1952 when Plumbridge man, Robert Smyth, represented Ulster on the wing.

"We are sure Tom will earn more caps next season and we hope this will inspire all our mini and youth players to work as hard as Tom has, and it shows that if you have the right attitude, you can achieve anything," the spokesperson added.