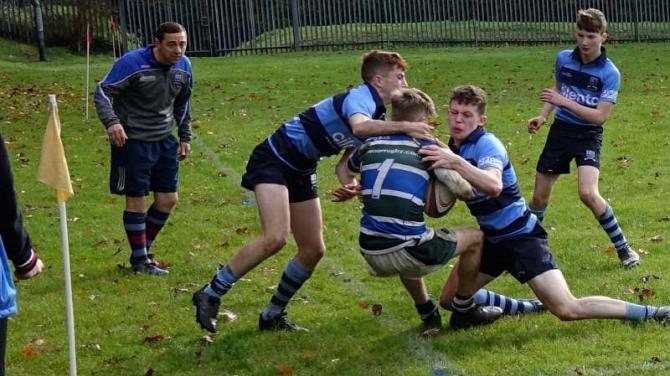 STRABANE Academy's rugby team will become history makers this Saturday if successful in their bid to make the third round of the Schools' Cup.

Standing in their way is Grosvenor Grammar School and coach Adam Bratton is hoping supporters will turn out in large numbers - observing Covid-19 safety measures - to help get the side over the line.

“This is the third time since the school’s formation in 2011 that we’ve appeared in the second round,” he said.

“So it’s a massive game, especially with it being a home tie.”

Strabane Academy know their opponents well having played Grosvenor back in 2019, a game they lost 20-5.

But Adam insists he is only focused on his own team.

“All we can control is what we do,” he said.

“We’ve prepared well despite the weather and despite the fact we have quite a few injuries.

“Our captain Mark Miller has quite a serious injury - he’s out with a knee problem and is a big loss for us.

“The guys have rallied round and filled in holes the best they can to try to compensate for that. It’s impossible but it’s kept the group tight together.

“The only thing we can expect is that our effort levels are 100 per cent.

“All of the work has been done and they’ve worked incredibly hard at training.”

The Academy have an incredibly young side as over a dozen players are in fifth form.

That has its own challenges but Adam is excited about the team’s potential.

“We’re certainly looking to build a team for the future,” he continued.

“Covid-19 has had a massive impact on everyone. I look at my own rugby, I’m the captain of Rainey Old Boys.

“The All Ireland League, which Rainey plays in, has been decimated for the past 18 months and it’s fed right down through the system.

“We have guys playing in Year 12 who have missed out on a full year of Medallion rugby and that has a huge impact because the game becomes much more technical and obviously you have the physicality as a 15 or 16-year-old against 18-year-olds.

“All you can ask is that the effort the boys have shown in training and the ambition, their pride in school and resilience to not give up, come out on the pitch on Saturday.

“The Schools’ Cup is the second-oldest rugby competition in the world and as a coaching staff, we have told them that this is something that can’t be taken away from them.

“To represent their schools in the Schools’ Cup is something they will be able to tell their children and grandchildren.

“If you looked at the school 11 years ago, we were playing in the second and third 15 of the competition.

“To be able to compete against schools that are two or three times our size in number is a fantastic achievement for the boys.

“That has been achieved by all the work they’ve put in.

“So it’s a huge occasion for the boys and as a school we’re proud that we can facilitate that and meet the needs of these kids.

“I’m incredibly proud of them and I know the other coaches feel the same way.”

What would it mean for the school to reach the third round?

“The result is not important,” he responded.

“If they go and physically, technically and tactically express themselves on the pitch on Saturday morning then they can’t have any regrets about the result.

“We have so many young players who are getting this opportunity and it’s going to be a learning process for them. Hopefully, it’ll spur them on.”