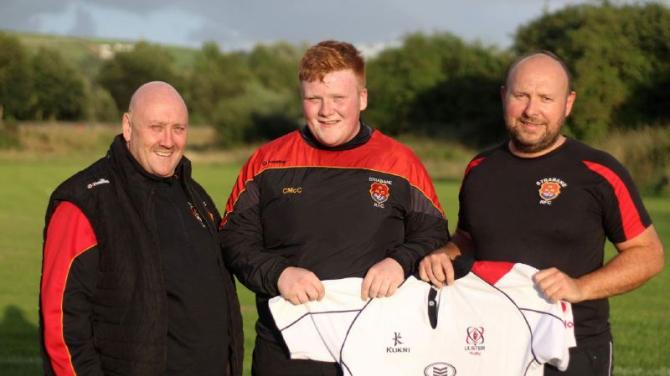 IN another first for Strabane Rugby Football Club, Cathair McCrory has been selected to train with the Ulster Rugby under 18 Clubs squad.

This is a huge achievement for Cathair, who has worked through a selection process with his club in Strabane, the Regional Development squad and has now gained recognition at provincial level (the nine counties of Ulster).

The last time a Strabane RFC man played for Ulster was in the 1952-53 season, when Robert Smyth, from Plumbridge, played on the wing.

Cathair will be in line to earn a full cap and jersey in springtime when the squad will play Munster.

"Cathair began his rugby journey just four short years ago, training for a season with our minis section and he played in the first game, for the very first Strabane under 14 team",a club spokesperson explained.

"He impressed his team-mates so much with his natural ability and leadership qualities that they voted him captain of the team, a position he has held since.

"The young Strabanimal has been a model player and the training sessions he has missed in those three years could be counted on your fingers.

"As in most sports, good listeners make good players and young McCrory has always been an avid student of the game - to progress, you must realise that you never stop learning and Cathair is a coach's dream in this respect.

"That, coupled with his natural talent and strength plus superb support from his family who deserve huge credit, have all added up to get Cathair selected for this elite level.

"Strabane RFC are unbelieveably proud that one of their own has made it so far and hope that he is the first of many to be selected for Ulster as the club's minis and youth set up now starts to bear fruit.

"It just shows that with the right attitude, dedication and support anyone from Strabane can reach the highest level.

"We hope this is an inspiration to all our players, from the minis just starting at age 5, through our youth system,12-18 and up to the senior club. We really can put our town on the rugby map.