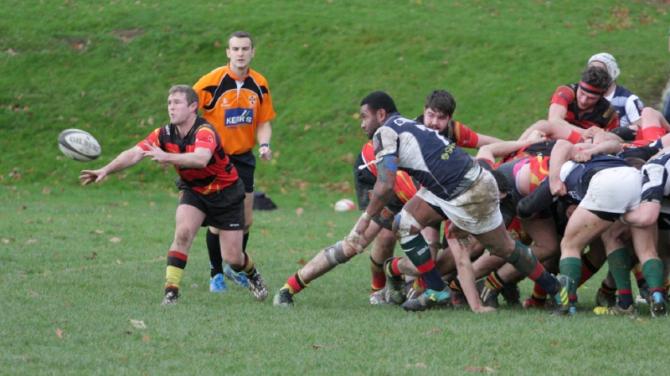 STRABANE bounced back from last week’s defeat in fashion with a resounding 38 points to ten win over Civil Service in the league.

Strabane were looking to respond from a disappointing loss to Holywood last weekend and get their league campaign back on track.

Civil Service travelled to the Liskey Road for the second time in three weeks after losing to Strabane in the Gordon West Cup three weeks earlier.

The game kicked-off and it was looking positive for Strabane as they put a lot of pressure on the Civil Service defence. The hard work paid off with Johnny Robinson crossing the try line. A converted penalty from Strabane’s David Shaw made it 10-0 to Strabane.

A yellow card for a high tackle was shown to Strabane’s Clive Hawkes and this allowed Civil Service back into the game as they scored a try and a penalty to tie the game 10-10 with 20 minutes to go in the first half. Strabane finished the half well with the returning Adam Cummings scoring for Strabane. A conversion from Shaw made it 17-10 at halftime.

In the second-half Strabane had to absorb some early pressure from Civil Service but the hosts tackled well that led to a turnover in possession.

David Shaw broke a number of tackles to score underneath the posts - 24-10 to Strabane.

Shortly after the game restarted a storming run from prop Lee McLaughlin broke tackles and set Strabane up in good field position. Andrew Baird broke up the wing and outpaced several defenders to score under the posts - 31-10 to Strabane.

As the game was nearing its end the referee sent Strabane’s Lee McLaughlin to the sin bin for what he believed was a late tackle. Despite this Strabane regrouped and Johnny Robinson got his second try of the game.

A successful conversion from Shaw left the final score 38-10 to Strabane.