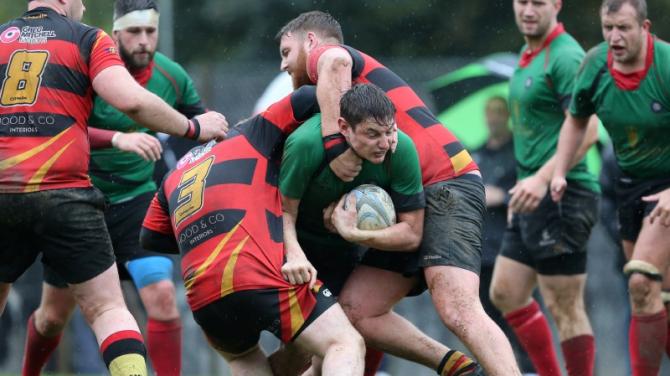 A POOR first half in which Strabane allowed PSNI to score 30 points was a killer blow despite a much improved second half from the home side.

Strabane refusing to give up came into the second half a different team scoring two tries from Johnny Robinson and Nathan Cummings and holding PSNI to only one converted penalty. Despite this Strabane where unable to overturn the large deficit on a wet day at the Liskey Road.

As the match kicked-off it was clear this was not going to be a day for expansive flee flowing rugby due to the rain. Instead this was going to be a match of ‘up the jumper rugby’ with a lot of pressure being put on both teams’ forwards to carry the ball.

Early on both teams got their hands on the ball and tested each other defences. It was the PSNI who made the initial break and a few pick and goes from the forwards from Strabane’s five metre line got PSNI on the board early. A second try came for the PSNI when a good line from their centre cut through the Strabane defence to score under the posts.

Despite Strabane having possession they just couldn’t put any phases together. Several good breaks by Strabane couldn’t be finished off to get Strabane back into the game. PSNI ran in another two tries before half time leaving the score at 30-0.

Whatever head coach, Kris Dunne, said to his men at half time had the desired effect. Strabane came out onto the pitch a different team from the first. The first ten minutes of the second half Strabane where camped in the PSNI 22, constantly probing for gaps.

Eventually prop forward, Lee McLaughlin, breaking free off the back of a Strabane maul to put his team on the front foot. A sublime pass from fly-half David Rankin to Johnny Robinson got Strabane on the scoreboard.

Strabane again put pressure on PSNI with their lineouts and scrums working well. A smart chip in behind from Rankin allowed centre Nathan Cummings to score in the corner. A PSNI penalty after this made the score 33-12 with ten minutes to go.

Strabane spent the rest of the game attacking the PSNI and coming close to a third try on a number of occasions just to be held up short. Just before the final whistle a PSNI winger broke from his own 22 and nearly scored but a try saving tackle by Andrew Baird held him short.

Final score 33-12. A tale of two halves with Strabane head coach Kris Dunn having plenty to work on from his squad but will be hugely encouraged by his side second half performance.