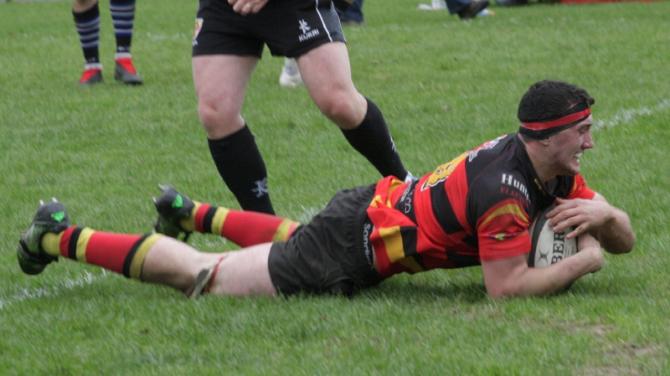 STRABANE made it a fourth win in four matches as they defeated Newry 30-10 in the Kukri Ulster Rugby Championship Division 3 at the Liskey Road Campus.

The Strabane Devels were also victorious in the Regional West League against Donegal Town 22-7 with tries for Alistair Gore, David Riddles and Peter Smith.

The match kicked-off with Strabane looking ready to run at their opposition. The first ten minutes Strabane had all the possession with both their forwards and backs testing the Newry defence that held up well against the onslaught.

Eventually with Strabane camped on the Newry five metre line, fly-half David Rankin popped an inside ball to prop Lee McLaughlin who bulled over his tackler to open the scoring.

Soon after the restart a Strabane lineout in Newry territory allowed Steven Torren to cross the whitewash. 13-0 to Strabane.

A Newry penalty and a try before the break made it 13-10 at half-time with all still to play for.

Soon after the restart a chip in behind the Newry defence allowed Andrew Baird to outpace his opposite number to touchdown in the corner 18-10.

As the match continued Newry tried but could put little together as the Strabane defence was superb in driving the Newry men back.

A Strabane scrum on the Newry five metre line gave Steven Torrens his second of the game and gave Strabane the bonus point.

As the clock ticked over 80 minutes one last Strabane attack allowed Ruairi Lynch to run in unopposed to round off the scoring.

The final score was 30-10 to Strabane. Strabane are away to Monaghan next Saturday with kick-off at 2.30pm.

Meanwhile, Strabane had its first ever under-14s team who played Cavan on Saturday in a league game. The Strabane under-14s ran out 75-0 winners.