Strabane make it two from two in win over Virginia 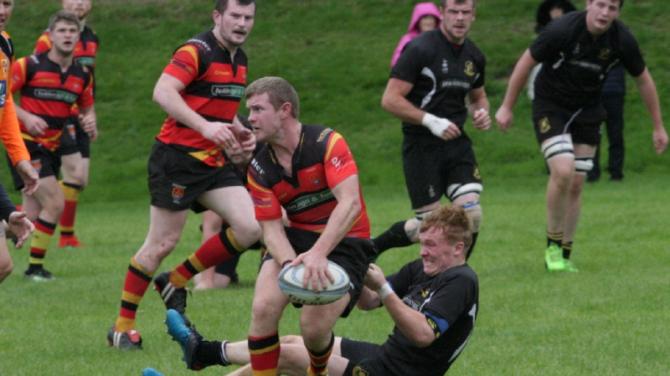 STRABANE kept their winning start to the season going with a hard fought 19 points to 10 win over Virginia on Saturday at the Liskey Road Campus.

A penalty try from a scrum with Andrew Baird and Steven Torrens crossing the whitewash to give the Strabane men their second win of the season.

As the match kicked off it was obvious from the start of the game that Strabane had the upper hand in the scrum, with the pack winning their own scrums and putting a lot of pressure on Virginia on their put in.

This saw the first score of the game when a Strabane scrum on the Virginia 5 metre line resulted in a penalty try for Strabane; 7-0 Strabane.

Possession slipped back and forth with several handling errors on both sides. Eventually Strabane managed to put a number of possessions together which resulted in a break down the wing from Ruari Lynch who passed to Andrew Baird who showed good composure to score in the corner.

A missed conversion left it 12-0 before Virginia converted a penalty before the half.

The half started with Strabane defending at the halfway line. The Virginia fly-half decided to try a chip over that landed awkwardly for the Strabane backline allowing the Virginia winger in for a score; 12-10 to Strabane.

As the second half wore on Strabane began to dominate in the middle of the park.

A number of good carries from the Strabane forwards left room for number 8 Steven Torrens to score a try. Ruairi Lynch kicked the conversion 19-10 to Strabane and that’s how the scoreboard would stay until the final whistle.

Strabane’s next game is away to B.H.S FP this Saturday.