Bready on brink of retaining title 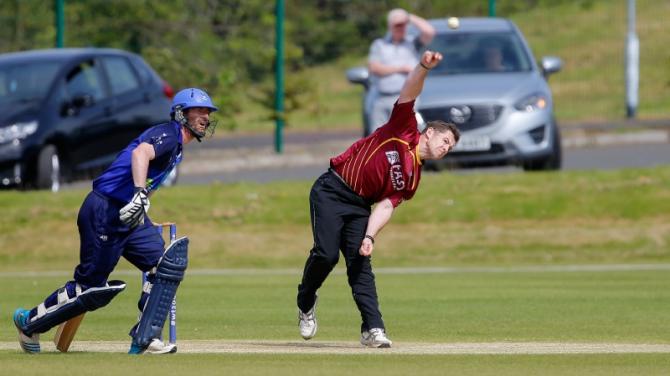 BREADY are on the brink of retaining their Premiership title after beating title rivals Newbuildings by four wickets at Magheramason.

Chasing 133, the home side were wobbling at 93 for 6, but Davy Scanlon again proved the man for the occasion, as he and Ian Young (17*) steered their side over the line.

Both attacked the bowling getting the runs needed in just four overs, with Scanlon’s 41 not out taking just 27 balls (6 fours, 1 six).

Earlier, it was teenage spinner Gavin Roulston who did the damage, taking four wickets for 28 runs, including top-scorer Ryan Hunter, who made 40.

Bready will clinch the title in two weeks’ time providing they beat Eglinton and secure more bonus points than Newbuildings.

Fox Lodge warmed up for the Senior Cup final with a nail-biting one-wicket win at home to Coleraine.

The Bannsiders posted 209 with the foundations laid in a third wicket stand of 72 between top-scorer Varun Chopra (56) and in-from opener Scott Campbell (46).

There were 20s too for Matthew Hutchinson, Marcus Poskitt, and Archie Block in their 209, while in the bowling, there were two wickets apiece for Ali Doherty, Jamie McIntyre, and Adam Walker.

Runs from Dean McCarter (49), Craig Doherty (38), Brian Allen (30), and Jason Milligan (28) looked to have the Foxies well in control at 130 for 3 and 191 for 5, but they wobbled with the finishing line in sight with Stephen Hutchinson taking three wickets. It was left to Adam Walker to hit the winning runs from the first ball of the last over to seal the victory.

Brigade warmed up for Sunday’s Faughan Valley Cup with victory at Eglinton in a high-scoring game.

There were late runs too for Graeme McCarter (29) and Andy Britton (22*) as Brigade made 279 for 6 – three wickets for Richard Wylie.

Eglinton made a valiant fist of the chase, with skipper Andy Millar leading the way with 95 from just 91 balls (6 fours, 4 sixes), just missing out on a deserved century.

He shared a second wicket stand of 102 with Mike Erlank (38), but the huge total proved just beyond the, losing by 32 runs.

Closest game of the day was at the Bleachgreen, where Donemana edged out Ardmore by just two runs.

William McClinctock hit 5 sixes and 3 fours in a quickfire 58 from just 36 balls, while openers Jamie Huey (33) and Mohammed Sarwar (28) also made runs. Dhram Singh brought Ardmore back into contention with five wickets as the visitors slipped from 137 for 3 to 163 for 9.

The game was halted after a Donemana player collapsed in the changing room, necessitating an ambulance.

Graeme Boyd hit what was to be a vital 30 on the resumption to get Donemana to 199.

The Ardmore chase was in tatters at 37 for 6, but they rallied with a seventh wicket stand between Conor King (65) and Mark Chambers (25).