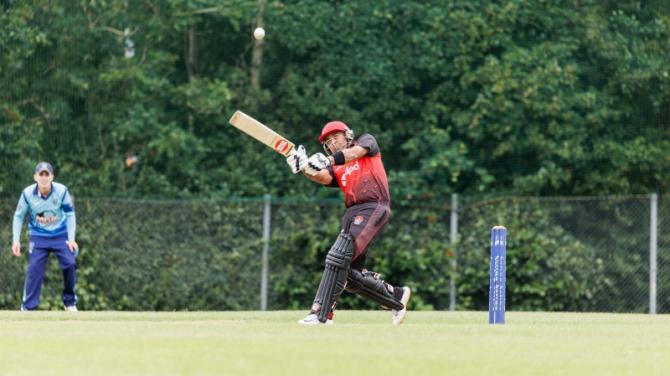 BRIGADE proved much too strong for Strabane as Iftikhar Hussain hit a century in a 165-run win in the Sammy Jeffrey semi-final on Sunday.

Ryan Gallagher (4-51) was the most successful of Strabane’s attack.

A difficult chase became nigh on impossible with Aaron Gillespie feeling unwell and not batting.

Gallagher top-scored with 32, while Ernest Musuku and Rhys Logue each made 22 in their total of 136 – Jamie Millar taking 4 for 35.

Coleraine knocked out holders Glendermott with a 60 run win at The Rectory.

Opener Scott Campbell anchored the Bannsiders total of 176 for 7, hitting 7 fours and a six in his 84, before falling in the final over.

Burns then took four wickets, with two apiece for Stephen Hutchinson, Scott Campbell and Ravi Karunaratne as Glendermott were dismissed for 116.

Elsewhere, on Saturday, Glendermott skipper Ben Mills powered his side into the Sperrin Springs final with a superb half century to beat Strabane by four wickets.

Chasing 181, the Rectory side were given a fast start by Nathan McGuire (42) and Jamal Anwar (29), who each cleared the ropes twice in an opening stand of 70 in seven overs.

Rhys Logue (4-16) slowed their progress with a superb spell, and at 129 for 5 after 15 overs, it seemed as if the Red Caps would prevail.

However, Mills thumped 6 sixes and a four in his unbeaten 51 from 20 balls to seal victory with ten balls left.

Earlier, a opening stand of 164 between Ehtesham Ahmed and Aaron Gillespie looked to be winning the match for their side.

‘Shami’ top-scored with 88 from 49 balls, while skipper Gillespie’s 72 came from 57 deliveries, with both hitting seven sixes.

Mills (3-28) the only bowler to take wickets for Glendermott on a day when the bat dominated.

Ardmore skipper Tyron Koen was the difference between the sides as the Bleachgreen side beat Fox Lodge in a low scoring game at Ballymagorry.

The home side found the going tough, struggling to 98 for 4 in their 20 overs, with Craig Doherty (39*) hitting the only six of their innings.

Ardmore too found the going tough, with the exception of Koen, who hit 6 sixes and 2 fours in his unbeaten 54 from just 37 balls to help his side to a six wickets win in the 17th over and set up the clash with Ardmore.