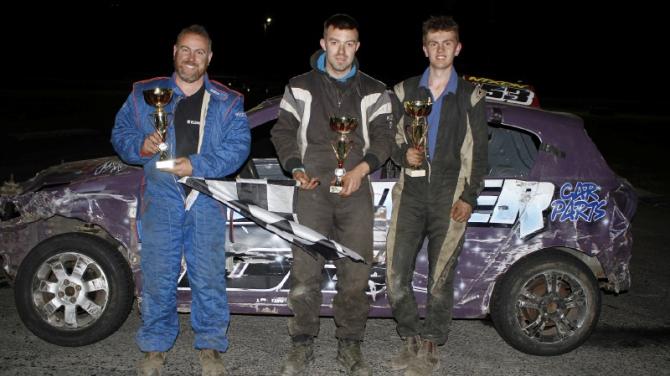 The overall winner of the year long points chase was Dungannon’s Derek Martin who was crowned NI Champion for the second year in succession.

There were large entries in every formula on show, which led to some terrific racing for the big crowd enjoying a fine summer’s evening on the terraces.

Hampshire visitor Jack Jones took the honours after a fine drive to take the Ninja Karts Tullyroan Challenge Cup, and another Banbridge driver, Colin McNiece, was equally as impressive on his way to the Stock Rods silverware.

The Rookie Bangers delivered great action all night, with a grid of 34 cars thrilling the crowds in their Irish Teams Championship. ‘The Hooligans A’ drew first blood with a win for Phillip Farrell in the opening heat in a drama filled race, before Dan Dooner sped to the heat two win for ‘Team Juice’.

The double points final was every bit as frantic as the heats, even coming down to a one-lap dash to the flag after a late stoppage.

Donemana's Ryan Nixon got into the lead in the closing stages and it was that win that sealed the Irish Teams Championship for his ‘Bad Company B’ outfit which also included Reece Pollock, from Drumahoe and Gavin Gamble, also from Donemana

Josh Goligher and William McFaul were second and third in the final, ahead of long time leader Matthew McKinstry.

The next meeting at Tullyroan Oval is on Saturday at 6.30pm featuring Micro National Bangers ‘Micro Madness’, the Superstox Neil Davison Memorial Trophy, the Tullyroan Challenge Cup for 1300 Stock Cars plus Lightning Rods and Junior Productions.