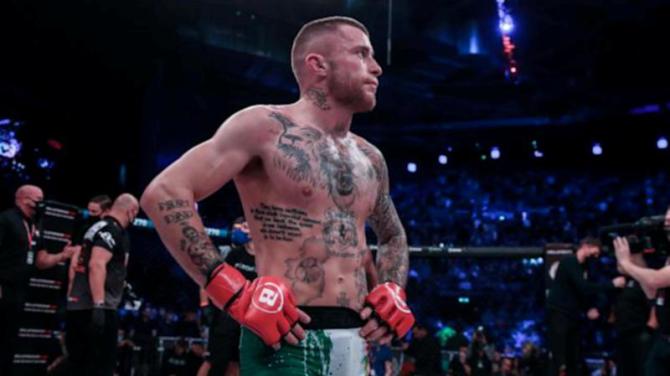 JAMES Gallagher says he has "absolutely no excuse" after suffering a shock defeat in Dublin at Bellator 270 in front of his home crowd on Friday night.

'The Strabanimal' was hoping to earn his fifth straight win inside the Bellator cage in hopes of earning a shot at the Bantamweight title.

However, he and the Dublin crowd were left in stunned silence after he was beaten in the third courtesy of a guillotine choke by Patchy Mix.

The 25-year-old was competing in his first fight since departing John Kavanagh’s SBG Ireland for USA’s States and Glory MMA.

Despite now being trained by James Krause, Kavanagh was still in his corner for the showdown in front of the raucous Dublin crowd.

He was taking on an opponent that weighed in for the bout almost 2lbs overweight - making it catchweight and forcing Mix to forfeit a percentage of his purse to Gallagher as penalty.

With the crowd in full voice singing, Gallagher was caught by a hand under the neck early doors in the clinch, but after around a minute on the floor, Strabanimal got back into the ascendancy but the first ended as a tough one to call.

Mix used his size advantage to overpower his smaller foe, taking him down and keeping down for a lot of the fight.

Gallagher, though, was undeterred and tried his best to close the distance to get in a few shots, but he couldn’t do it on a consistent basis. Needing a finish in round three, Gallagher went in for an early takedown, which ultimately ended up being his down fall. That’s because Mix was able to latch on to a guillotine choke to force the tap.

The Strabanimal took to social media to reflect on the fight with his supporters.

"Forever a student of the game," he wrote.

"I've got absolutely no excuses. I showed up prepared and came up short.

"I can't thank my team enough. I've made so many changes recently that will stand with me.

"Thank you to absolutely every single person who showed up and blew the roof off the 3Arena.

“It was like a movie, I’m telling you. Something incredible,” Mix told reporters backstage after his win. “I always want to fight in front of that to be honest with you. It was crazy.”

“Yeah, he was tougher than I expected. I knew he was mature,” Mix said.

"He earned my respect. He did have my respect before, as well. As a competitor, he has my respect.

“Outside of that, there are some moral codes that you have to abide by. Maybe he don’t like me, and I don’t like him, but I still kind of respect his game and stuff like that.”