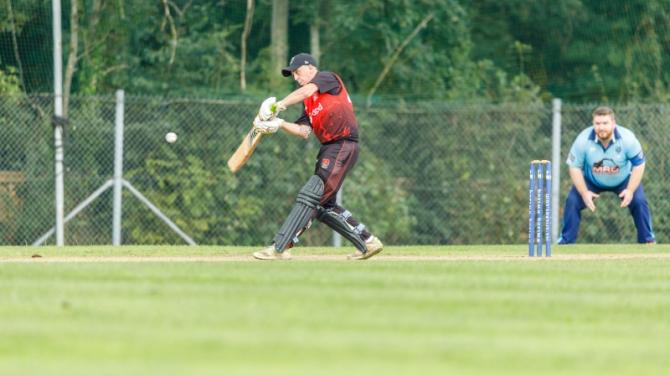 AT Strabane Park the Sammy Jeffrey final went down to the very last ball after a titanic 200-over battle between Strabane and Glendermott.

The visitors had taken a 26-run lead into the second innings this morning, but Strabane turned the game on its head at the start of day two with some quality batting.

Aaron Gillespie and Kevin Gallagher (25) put on 41 for the first wicket before Gillespie and Rhys Logue then added a superb 119 for the second to completely wipe out the deficit.

The Strabane skipper was run out for 68 (7 fours, 1 six) with the score on 160 and that started a bit of a collapse in the home ranks. Logue followed soon after for 55 (3 fours, 1 six) and although Ryan Gallagher chipped in with 29, the rest of the order fell away.

And where the Bonds Street side would have been expecting to be chasing 240-plus at one point, skipper Alan Johnson was more than happy with a target of 188 for victory.

Anwar of course was key- the Pakistani having scored close to 400 runs by that point in this competition alone, however the hosts were cock-a-hoop when Tom Harpur had him caught behind from the very first ball he faced.

Strabane were huge favourites from there but no-one had told Bob Robinson and Todd Killen who set about posting a patient, but ultimately match-winning century stand for the second wicket.

That pair spent 32 overs together- Killen making 54 from 112 deliveries and Robinson 52 from 107 before Reece Laird added 27 and Steve Moore 21.

Strabane kept taking wickets at key times however- Harpur faring best with 3-35- and Glendermott still needed 12 from the last two overs to win.

Chris Havern was left to defend just 5 from the last and he very nearly did it too. Tylor Moore and Curtis Ross just managed to scramble a single from the final delivery to send the huge travelling support wild with delight.

It was a superb spectacle of a final, played in excellent spirit between two very well matched teams; something that winning skipper Alan Johnson alluded to in his victory speech.