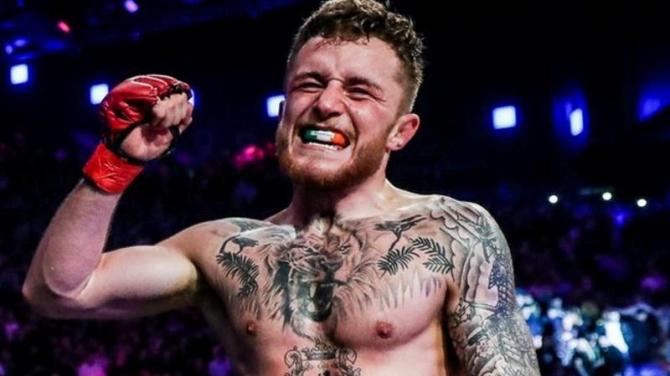 AFTER more than 18 months away from the 3Arena, Bellator's return to the iconic Dublin venue is set for Friday, November 5 when Ireland’s own number six ranked James 'The Strabanimal' Gallagher (11-1) faces the number two ranked Patchy Mix (14-1) in a huge bantamweight main event to headline Bellator 270.

In the co-headliner, number four ranked lightweight and Dublin’s very own Peter 'The Showstopper' Queally (13-5-1), will be looking to bring the house down again when he faces 23-time BEellator veteran and number one ranked Patricky 'Pitbull' Freire (23-10) in a highly anticipated rematch.

Tickets to Bellator 270: Gallagher vs. Mix are now on sale and can be purchased through Ticketmaster.ie and Bellator.com.

The egerly awaited bantamweight matchup between Gallagher and Mix has the potential to go down as one of the all-time great fights in Bellator history.

It was originally due to take place in May at Bellator 258, but injury forced Gallagher out of the encounter.

Now, in front of what is guaranteed to be an electric home crowd, 'The Strabanimal' will finally get his chance to silence Mix as he looks to earn the biggest win of his career to date.

“I’m so grateful to be back as the headline in Dublin,” said Gallagher.

“I’ve moved to America to take my mindset and skill set to another level and I’m happy I can show my work to my home fans. Welcome to the Jimmy Show!”

Patchy Mix is currently the number two ranked bantamweight and fights out of Extreme Couture in Las Vegas.

Like Gallagher, Mix has made a name for himself in the Bellator cage by displaying impressive submissions, including the rare Suloev Stretch.

Mix said of his long-awaited matchup: “I’m going to walk into James’ home country and put him away in the first round."

After a series of lively back-and-forth trash talk encounters and cancelled bouts due to injury, Queally and Pitbull finally met in the cage in May earlier this year, with the Irishman causing a huge upset, securing a hard-fought TKO victory due to a doctor’s stoppage following a cut Patricky sustained in the second round.

Queally, meanwhile, who trains alongside Gallagher out of Ireland’s famous Straight Blast Gym, will be looking to once again use the might of the home-crowd to help him secure a decisive win over his bitter rival, Pitbull.

“I can’t wait to get back out there again to settle this once and for all with Pitbull and really give the 3Arena crowd something special,” Queally said.

“Patricky is such a perfect opponent, there has been so much that has gone on with me and him that I think the crowd will be even more invested than normal this time.

"Expect an all-out war – I’m going to beat him, and the lightweight belt is next.”

Freire – the older brother of Bellator lightweight champion Patrício – has competed professionally since 2005, earning a fearsome reputation as a knockout artist. Living up to the moniker 'Pitbull', Freire will be looking to even the score with Queally, silence the home crowd and get back to his winning ways.

“He knows he was getting beat up in the first fight,” said Pitbull. “He felt pain in his legs and body, I'm gonna make him feel even more pain now. The Irish fans are very loud and passionate, but when I knock him out, you will be able to hear a pin drop in that arena.”

The news of a return to Dublin rounds off a trio of Bellator MMA events confirmed on European soil in 2021, with the cage setting down in London on October 1 and Moscow on October 23 before heading to the Irish capital on November 5.