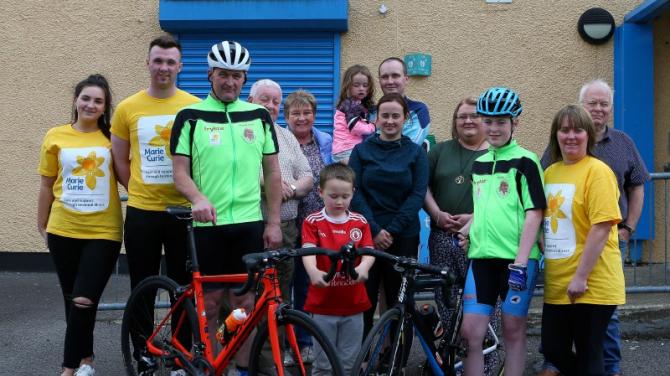 THE community of Strathroy demonstrated its togetherness when a large number of supporters gathered to give Shane Kelly a much-deserved hero’s welcome after his phenomenal cycle.

It took Shane just over eight hours to cycle the 153 miles from Galway to Strathroy.

Shane, who is now living in the Strabane area, was joined by his son, Conor, 12, on this epic adventure to raise money for Marie Curie, a charity Shane said “had done so much” for his family throughout his mum Ann’s battle with cancer.

Ann, a highly-respected and popular figure in the area, sadly passed away last September at the age of 65.

She was described as someone who played an important role in the community and who made a big positive impact on life in Strathroy.

Ann - as well as her husband Mickey - had been involved in all aspects of community life in Strathroy.

Shane said his late mum had been looking down on him and Conor as they made light work of such an exhausting challenge.

He paid tribute to Marie Curie, an organisation he has raised over £4,000 for.

“They are just amazing people, who do amazing things and I just wanted to give something back to them considering all they have done for our family,” said Shane.

“The Marie Curie nurses were out with mummy throughout the last couple of weeks at home.

“Mum was such a special woman to me and she was always there.”

The Kelly family enjoyed holidaying in Galway in August and this was the reason Shane chose the city as a starting point for his amazing cycle.

“We spent a lot of summers in Galway with mummy and daddy growing up,” continued Shane.

“We have a lot of great memories there in Galway and Eyre Square.

“It was a very emotional day and the support of everyone meant so much to us.”

Shane and Conor are keen cyclists and cycle for Strabane Lifford Cycling Club. They had put in hours and hours of training in preparation for this fundraiser.

“It was a brilliant experience,” said Shane. “I had never cycled that distance before, so I knew it was going to be difficult. I had cycled 102 miles before, but this was a fair distance.

“I pushed myself through it and my son cycled most of it with me. He’s only 12 so he didn’t ride it all because it would have been too much for him.”

Shane had set a target of “10 or 11 hours” to complete the race - and to finish in eight hours and 20 minutes exceeded all expections.

“We weren’t racing up the road, we just made great time, talking to one another.

“We had a car with us and my wife, Carmel, son, Ryan, and my dad really helped us through it.

“People were sending encouraging messages through Facebook and my wife told me about them through the car window to keep me going.

“There was a hard part between Belleek and Kesh where we felt tired and we pulled in to get a drink of juice. They all spoke to me and told me I was on the home straight and gave me the motivation I needed to get home.

Shane was also blown away by the reception he received on his return to Strathroy.

“Everyone was clapping and it was just so brilliant, so emotional, to see.

“Mummy and daddy did a lot of work with the community in Strathroy and to see how many people respect them was just so special to us.

“It was just the most emotional thing I have ever went through. It meant a lot to have my whole family there as well.

“It’s a day I will never forget. Mum was looking down on us and everything went so well - we had no punctures, nothing went against us.

“We know she was guiding us through it, she kept us safe on the road and everything.”

If you would like to donate to Shane’s cause, visit www.justgiving.com/fundraising/shane-kelly13