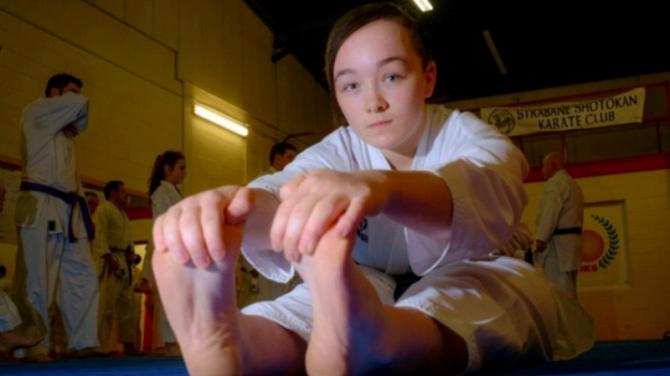 SPORT physical activity and health student, Geri Friel from Strabane, not only graduates with a first-class honours degree and a diploma in Professional Studies with distinction but has also achieved a multitude of sporting honours in karate during her time at Ulster University.

Geri began karate at her local club in the town at the age of five and for the past 17 years it has been a driving force in her everyday life.

“The discipline, respect, and motivational influences of karate has definitely shaped my personality and work-focused commitment towards my education," she says.

After receiving her A-Levels in biology, PE and ICT from Holy Cross College in Geri said the decision of where to continue her education was a no-brainer.

Living just 20 minutes from the Magee campus, she was able to pursue both her academic and sporting ambitions to the fullest, going to the gym in the morning before lectures and attending karate sessions in the evenings.

“I could still train at my local club every night and still be a part of a great sports course,” said Geri. “I never realised how well-developed and modernised the Magee campus was.

"Looking back now I’m so glad I chose the course I did, because I enjoyed top level education and still maintained my training.

"I’ve always been a determined person so when I started university, I always told myself I’d work to the best of my ability.”

In the September that Geri began her studies at Ulster University she represented Ireland to win the JKS World Championships, before being graded to the rank of second Dan later that year.

The following year she won the JKS European Championships.

"They always enabled me to have a good balance between my sport and studies.”

When it came to representing Ulster University on the karate floor, Geri excelled, winning both the Irish Varsity and British University and Colleges Sport (BUCS) Karate Championships back-to-back.

The sense of team spirit when travelling to the competition and competing in the tournaments were especially memorable experiences for her.

“The support I received from the University as I prepared for BUCS in Sheffield was top level. I was the only one from Ulster who competed at the event and I travelled over with just my coach.

"The University couldn’t have done enough to cheer me on virtually when I was there.

“Winning the BUCS was an amazing achievement for me. I always knew the BUCS was a highly thought-of event on the university sport circuit, and when UU asked me to compete at it, I was honoured.”

Geri’s immense success was recognised by Ulster University when she was awarded Full Colours at the annual Colours Awards Ceremony in 2019, together with the President’s Plate for the Most Outstanding Sports Person in Coleraine or Magee.

She became the first karate athlete in Ulster University’s history to win such honours.

“I’m delighted to be able to set an example to the rest of the university club and show them that training and working hard always pays off. I’m privileged to have trained with such a great bunch of people.”

Geri is now aiming to carry her passion for sport into her career upon graduation.

She completed a placement year with the Western Trust physiotherapy department, working with the cardiac rehabilitation, diabetes management and chronic pain teams to learn how physical activity and exercise is used to get people with health conditions back on their feet.

“I’ve always been really interested on how sport and physical activity can positively influence our health and how it can also successfully be used as a treatment and preventative tool for those with chronic or long-term diseases.

“I am hoping to work within this field in the near future and the contents of my degree has prepared me well.”