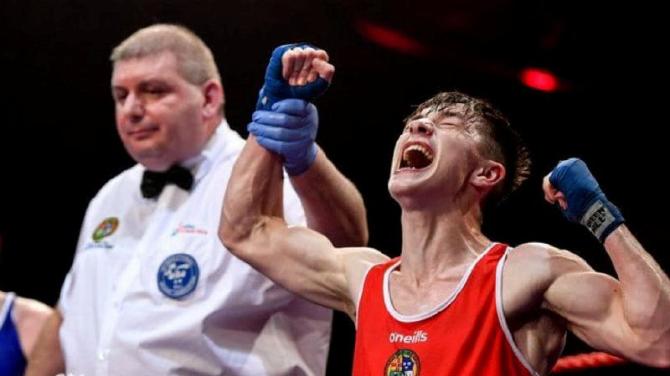 JUDE Gallagher was the toast of Newtownstewart at the weekend as the Two Castles Boxing Club athlete was crowned Ireland's Flyweight National Elite champion.

Having overcome the reigning senior champion Sean Kavanagh and last year’s 52kg Elite winner Adam Hessian in earlier rounds, Jude then defeated St Theresa's Regan Buckley on an unanimous decision on Friday night to take the prestigious title and with it, was also named the Best Male Boxer at the Irish Elite Championships.

Jude controlled the fight in the final two rounds to ensure Tyrone would have their first Elite Champion in 18 years and he now has his sights set on qualifying for the Olympic Games in Tokyo next year.

It is another highlight in the promising career of a committed young athlete. Credit must go to his coach Eric Donovan as well as his former coach Mickey O'Neill from Omagh, who had trained him for 10 years.

Jude, who is also a European and World bronze medallist at youth level, said: "It was great to get this title so close to the Olympics. It will put my name up there and now I just have to wait for the selection process now. But I won't get too far ahead of myself.

"It was fantastic to beat Regan. I won 5-0 but it was a really tough fight, a real crowd pleaser. Regan's a very tough lad and I knew he would be a tough opponent. He's a former professional athlete and won both pro fights. I'm really pleased I won, everything went according to plan."

Jude also paid tribute to the Two Castles Boxing Club, which was only formed in 2012 but is producing some of the best boxers the country has to offer.

"It's a great club and we are really flying at the moment," said Jude. "There are a lot of boxers coming through now, the club is just going from strength to strength. There are a lot of great people and great coaches here."