That's more like it! Strabane claim crucial victory to move from bottom 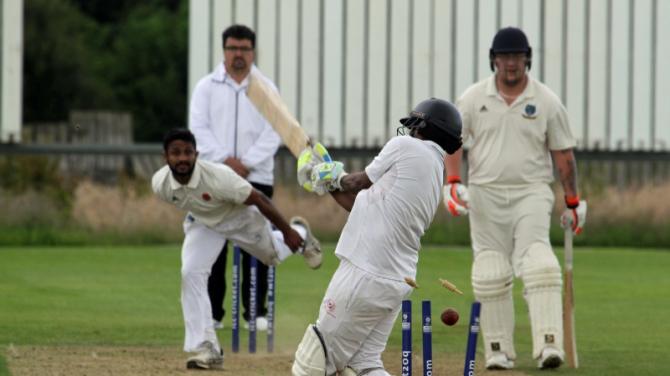 STRABANE'S crucial victory over Glendermott in the North West Premiership was a timely morale-boosting win ahead of this weekend's vital clash with Coleraine.

On Saturday, the Red Caps overcame Glendermott by eight wickets to move off bottom spot in the top-flight table - leapfrogging Coleraine - who lost to Brigade - in the process.

The much-needed and long overdue triumph couldn't have come at a better time, with fellow strugglers Coleraine coming to visit this Saturday.

Glendermott opted to bat first with Strabane's expert bowling keeping them on a tight rein throughout.

Strabane's batting was much improved after a disappointing season so far.

The early loss of Rhys Logue didn't affect them too much as Aaron Gillespie and Kevin Gallagher (33) easily repaired the damage.

And even after Gallagher's dismissal the Tyrone side kept the foot down, showing that there were no demons in the pitch as Gillespie and Peiris filled their boots.

The Warriors player looked back to his best as he hit 11 fours and 3 sixes in his 75 not out with the Sri Lankan unbeaten on 37 at the other end in an unbroken 92-run stand.

Speaking to the Strabane Weekly News, Peter Gillespie said the Red Caps were delighted to move off the bottom of the table.

"It has been a while!" he laughed. "It was a good victory - the kind of victory we have been threatening for a few weeks now.

“There was a sense of relief after the match. We knew we had been playing below par.

"We hadn't been putting all the elements together - bat, bowl and fielding - and this is the first time we have put all together in one performance.

"It showed the difference because we won pretty comfortably.

“We are really delighted about that, and it gives us a huge lift going into another crucial match this coming Saturday.”

Gillespie stressed that it is “vital” Strabane make best use of home advantage against Coleraine.

“We put a bit of daylight between ourselves and Coleraine with this victory with an ever diminishing number of games to play,” added Gillespie.

“Every game is crucial now. This is what is in front of us - and it’s huge. Another victory would be perfect.”

As it stands, Strabane are second from bottom, meaning they would face a play-off against the runners-up in the Championship to decide their league status.

After such a disastrous campaign, Gillespie admits he would take the current position if offered it now.

“We would happily take a play-off place, but if we could nip up into sixth that would be fantastic,” he said.

There are four games left for Strabane to save their top-flight status - two home and two away.

“Two of those are against Donemana and Brigade at the top of the table, and obviously we have Coleraine this weekend and we finish with a match at Ballyspallen.

“We certainly need to win one from four, if not two from four. Whatever we can get our hands on.

“Two from four would really get us clear.”

Strabane have to be confident going into this weekend’s crucial match, said Gillespie.

“There is still a bit of pressure, because we know we aren’t out of the woods yet.

“We have to be confident of getting a comprehensive victory.

“Confidence is a funny thing. We always knew even when we were playing badly that we were capable of better.

“Coleraine have suffered a couple of heavy defeats, and they’re having the same commitment problem a lot of teams in the league seem to be struggling with.

“They can’t get the same team out every week.

“However, whatever happens at the end of the day we have to back our best team against theirs.”