Claire tops the podium as Half Marathon hailed a huge success 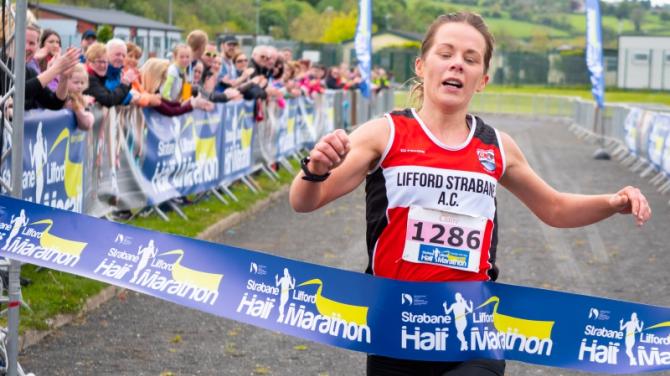 Gallagher was first home in a time of 1:15:49, closely followed by Pearce West from Clones AC and Finn Valley's John McFadden. ​

McGuigan retained her title in an impressive time of 1:18:33 and was joined on the podium by Aisling Murray from Carmen Runners and City of Derry Spartans' Denise Ward while Carndonagh athlete Karol Doherty won the wheelchair section.

​Hundreds of supporters took advantage of the sunny skies to line the route that started at Meetinghouse Street in Strabane before crossing the border into Lifford and finishing back on the running track of the Melvin Sports Complex.

​Mayor of Derry City and Strabane District Council, Councillor John Boyle, was the race starter and he congratulated everyone involved in another successful event.

​“Well done to everyone who completed the 2019 Strabane Lifford Half Marathon and to the Festival and Events team at Council and Lifford Strabane AC for hosting such a well drilled and organised event,” he said.

​“It was a heartening sight to see local participants alongside runners from all over Ireland and beyond weaving their way around the course and being roared home at the race finish at the Melvin.

​“Some of the runners will go on to enter the Walled City Marathon in the city next month and the Waterside Half Marathon in September and I would like to wish them all good luck for the next stage of their running journey whatever that may be.”

​Festival and Events Manager at Derry City and Strabane District Council, Jacqueline Whoriskey, thanked everyone who helped make the event another success.

​“The Strabane Lifford Half Marathon has grown year on year since we first hosted it six years ago and that success is down to the loyalty of local runners who come back year on year to compete,” she said.

​“We are indebted to our event partners Lifford Strabane AC as well as the PSNI, the Gardai the Department For Infrastructure and Donegal County Council for their guidance and expertise to manage an event of this scale.

​“Thanks also to our main sponsors O’Neills Sportswear.”