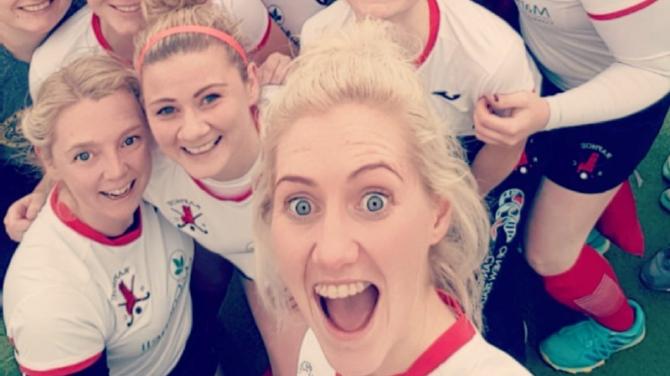 RAPHOE 1st XI Ladies clinched the Ulster Senior 1 title on Saturday and guaranteed promotion back to the Premier League with a 1-1 draw away from home against CI Ladies.   Having already heard that the other title contenders, Omagh, had been beaten by Priorians earlier in the day, the Raphoe side started the game knowing that just one point from their game would be enough to be crowned Senior 1 champions.

The North West side started the game strongly and got off to a great start when they took the lead on the ninth minute.

Leanne Patterson stole the ball from a CI defender just inside their 25. She quickly fed it through to Lyndsey Tinney, who spotted Wendy Patterson inside the D.

Wendy's shot on goal was saved by the keeper but Lisa Smyth was perfectly positioned to pick-up the rebound and slapped the ball over the line.

This was the ideal start for Raphoe and going by the opening ten minutes one would have expected a flurry of goals from the league leaders. However, the CI Ladies, and especially they young goalkeeper, were determined that this wasn't going to happen.

From here, CI made life difficult for Raphoe and started to come forward in numbers and at speed.  They were linking well through the midfield and played smart hockey within the Raphoe circle resulting in the Donegal side giving away a number of short corners.

It was from one of these short corners that CI found the equaliser. The ball was ejected out to the top of the D, switched to the right and was struck low and hard between the goalkeeper Humphrey's legs. After the half-time break Raphoe tried hard to find another goal in order to take the pressure off them.

Victoria Wray was unlucky not to score when she seen her shot hit the side netting. Zara Tinney, Lyndsey Tinney and Lisa Patterson had solid games in midfield, working hard at breaking down play and fielding balls through to the forward line.

Raphoe had no problem getting the ball in to the CI circle but their flare for scoring goals in the previous few games, was being kept at bay by the tenacious defending and superb goalkeeping from CI.

On the other end of the pitch CI were still looking dangerous on the attack but they were coming up against a group of players who were willing to throw everything they had to ensure they didn't concede another goal. Neither team could break the deadlock and the game ended fairly with a share of the points.

As the final whistle blew, there was scenes of joy and relief, as the Raphoe Ladies celebrated securing the league title.

It is "just reward" for the effort that the squad and coach Richard Tinney, have put in this season. They still remain unbeaten in the league and with having two games left to play they can go out and enjoy them knowing that the job has been one.