'That was for you' - James Gallagher dedicates victory to grandfather 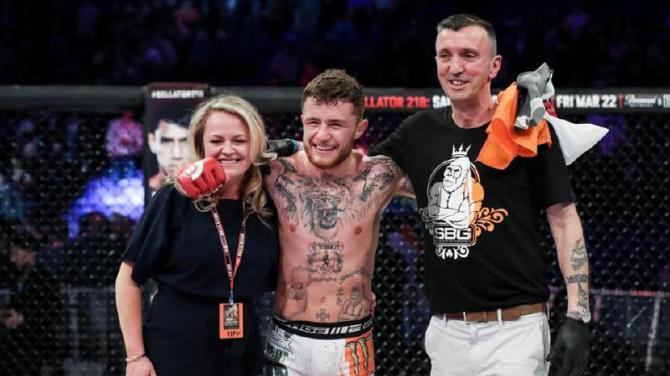 A PROUD James Gallagher dedicated his first round victory over Steven Graham at Bellator 217 in Dublin on Saturday to his grandfather who sadly passed away just over 48 hours later.

'The Strabanimal' earned his eighth victory of his professional career in emphatic style at 3Arena, securing the submission via a rear-naked choke inside three minutes, in front of thousands of supporters.

It was the perfect way for the 22-year-old to respond after his vicious knockout defeat last August, the first loss of his professional career.

The Strabane man dominated proceedings from the start with several submission attempts before executing the rear naked choke on two minutes 31 seconds in front of a raucous crowd.

He then scaled the fence in celebration in scenes which were a far cry from those that followed his first-round loss to Ricky Bandejas in South Dakota last summer.

He was soon joined in his celebrations by his parents, Andy and Doreen, as well as trainer John Kavanagh who also coaches Conor McGregor.

"The best part about it all... my Granda is very sick back home but he was able to watch me on Sky Sports," Gallagher said. "Soldier, this one's for you!

"And I would not be here today if it wasn't for my mother and father standing here.

"It's my mother's birthday on Tuesday. Tonight we celebrate!"

In the build-up to the fight, Gallagher had written on social media that he had not seen his mum in eight weeks, due to his high intensity training programme.

However, the talented Strabane man’s joy sadly turned to grief as his grandfather, Brendan Gallagher, passed away on Tuesday.

Having made his professional debut in October 2015, the Straight Blast Gym fighter now has an impressive record of 8-1.

Speaking to press after the victory, Gallagher said:“Everybody stood on me when I got beaten. ‘You need to be humble. That there will make you humble.

“People stood on me. They ridiculed me. I’ve never had as much grief over the last few months in all my life. They stood on me when I’m down. That’s weak-minded people. You help people when they’re down.

“I walk out and I win in front of 8,700 people, Irish fans screaming and singing their lungs off, all the way to support me... I am finally humbled.

“Hate me all you like. You’re wasting your energy while I’m putting all my energy into success.”

Speaking about what the rest of 2019 holds, the Strabane man added: “Hopefully I’ll fight in May, and then Dublin in September. We’re back!”