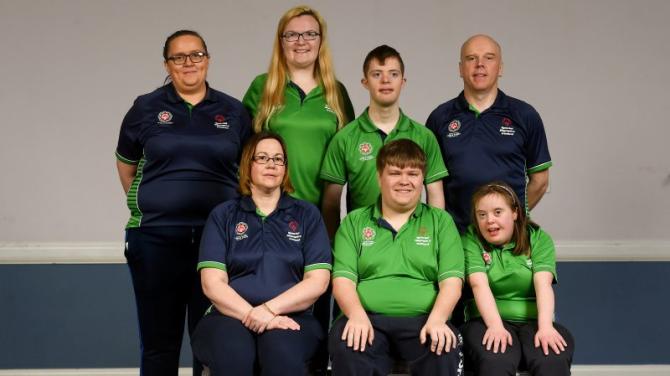 Siobhan will compete as part of the Team Ireland ladies basketball team.

Part of an overall 91-strong Team Ireland squad, Siobhan and her fellow athletes will represent Ireland at highest level of sporting competition for Special Olympics athletes.

She has been involved with both the Strabane and Letterkenny teams for 12 years and is looking forward to participating in the World Games. Her step-father and assistant basketball coach, Tommy McCay, will also join the team as a coach/chaperone.

Speaking to the Strabane Weekly News last year after winning gold at the All-Ireland Games in Dublin, thus confirming her selection for the World Games, Siobhan commented: “It felt absolutely surreal, it was like a dream come true and I know that sounds cliché but that's how I felt. Even playing for Ulster was a massive achievement in itself never mind scoring and winning gold.

''For a few years, it seemed like it would never happen because I was always so many points behind and then to actually be chosen to represent Ireland after my name was pulled out of a hat was amazing.”

The road to Abu Dhabi started four years ago and this week, the final preparations began in earnest with the official launch of Team Ireland for the 2019 World Games.

Taking place between March 14 to 21, Abu Dhabi 2019 will be the largest sporting and humanitarian event in the world this year. Supported by a volunteer management team of 39, Team Ireland will join 7,000 Special Olympics athletes from 170 countries at the Games.

They will be joined by fellow Team Ireland athletes from right across the island of Ireland, who will compete in a total of 12 sports: athletics, badminton, basketball, bocce, bowling, equestrian, football, golf, gymnastics, kayaking, swimming and table tennis.

Supporters and sponsors caught up with the athletes for the official launch of the squad on Friday night in Dublin, ahead of their last residential Team Ireland training session this weekend. The 91 athletes travelled to Dublin to train together and ensure that they are ready to take on their biggest sporting challenge yet.

Emma McMenamin is head of Delegation for Team Ireland at Abu Dhabi 2019. Commenting on the team’s preparations, she said: “These athletes are extremely focused and determined and like any athlete facing into a major competition, they are putting 100 per cent into their training.

“It was great to see how excited the athletes are to be part of this huge event. To represent Team Ireland and compete on the world stage in Abu Dhabi is a big honour and one these Special Olympics athletes are not taking lightly.”

Special Olympics Ireland is first and foremost a sports organisation and charity that supports children and adults with intellectual disabilities, right across the island of Ireland. As the countdown to the World Games gets under way, the organisation is calling on the business community and individuals in Northern Ireland to help raise much-needed funds to send the athletes to Abu Dhabi. To cover the cost of sending Team Ireland to the Games, Special Olympics needs to raise just over £4,445 per athlete.

Shaun Cassidy, regional director, Special Olympics Ulster said: “It is a great honour for each and every Ulster athlete that has been selected for Team Ireland, having worked so hard over the past three years to qualify for these Games and to compete at international level and represent Team Ireland in Abu Dhabi.

“With just over 50 days to go, the excitement is mounting, and we would encourage local businesses to come forward and put their support behind these dedicated athletes. Companies large and small across Northern Ireland can show their support for our Team Ireland athletes by visiting www.specialolympics.ie and getting involved in our Support an Athlete campaign. The business community has been so supportive and we are calling on you again to play your part and help make the dreams of our athletes come true.”