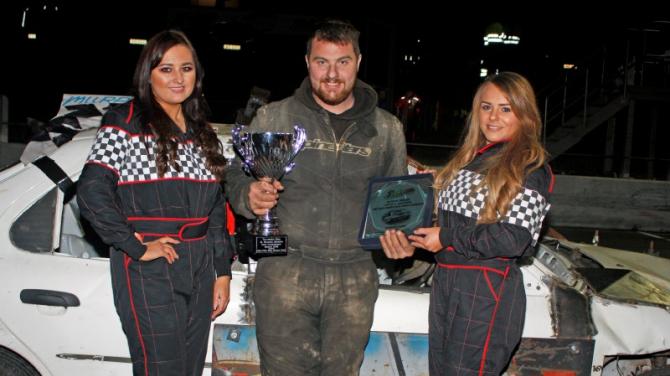 A DONEMANA man is stealing the spotlight in the sport 'banger' car racing in Northern Ireland as he bids to claim a third successive provincial title.

Leonard Dunn was crowned the Northern Ireland Points Champion in the National Bangers at the Tullyroan Ovals in 2017, and he successfully defended his title last year.

The 33-year-old currently leads the way this season and is determined to keep a hold of his title.

Leonard has been fascinated by the sport ever since he was a youngster when he would regularly attend the races at Nutts Corner with his friends.

"It was definitely my pride and joy," said Leonard. "I worked from a young age at the sheep market in Donemana and with my uncle in the Creamery in Artigarvan - any way just to gather up money. I have always had a strong interest in cars."

Also an extremely talented cricket player, Leonard represented Ireland at under 13 and 15 level but gave up the sport to concentrate on work and saving money for cars, parts and everything else that comes with racing.

"I won my first youth honour at around 18-years-old," beamed Leonard. And for the next 15 years the trophies have just kept coming and coming for the Donemana man - and 2019 could be his best year yet.

Leonard clinched his first major honour in 2016 when he won the Prostocks World Cup at Aghadowey, the biggest race in the formula, against a huge field of local and visiting drivers.

He went on to win the Irish Open Championship in the same year and was also third in the British Championship at Lochgelly in Fife, Scotland.

But the former Strabane High School pupil’s biggest honour was to come in 2017 in the National Bangers Irish Championship when Leonard won the Irish Championship at Tullyroan, and was also crowned King of Aghadowey for micro-sized cars.

Leonard had made a great impression on the National Bangers scene only two years previously, in 2015, when he finished second in the Championships at Tullyroan.

He has had success, too, in the coveted National Bangers Irish Teams Championship when he was on the winning team alongside Stephen Boyd, Willie McFaul and William McFaul Jnr.

But arguably his biggest triumph was when he was crowned the Northern Ireland Points Champion in the National Bangers in 2017, before retaining his title the following year.

As NI Points Champion, Leonard qualified for the biggest Banger race of the year in the Unlimited Championship of the World at Foxhall Stadium, Ipswich.

With 15,000 fans on the terraces, the drivers all turn out fantastically prepared cars with fancy paint jobs. This is the highlight for any Banger driver, just being part of this event.

In his first year competing in Ipswich, Leonard was fifth-placed out of a strong field of 63 of the world's best drivers. For Leonard, he was just delighted to finish the course!

"I couldn't believe it; usually not many finish the race because it is such a contact sport."

Despite the aggressive nature of the fast-paced and exciting sport, Leonard insists the drivers are 'very close' with one another the moment they take their helmets off.

"Everyone is very close-knit, friendly and there is a great atmosphere between the competitiors.

"It is dangerous, you could be driving at 60 miles-per-hour and it is a contact sport, but I have been lucky enough that my only injury was a broken finger."

It's not only cricket that Leonard has sacrified for the love of stock and 'banger' racing; the talented driver, who works as a full-time tractor mechanic, spends most evenings and weekends working on his cars.

And asked what qualities are required to compete at the top level of banger racing, Leonard said: "You need to be mechically-minded - you have to be able to work on your own car.  Races take place in my class usually every month, but I spend the full month just preparing; every weeknight and weekend I'm in the garage."