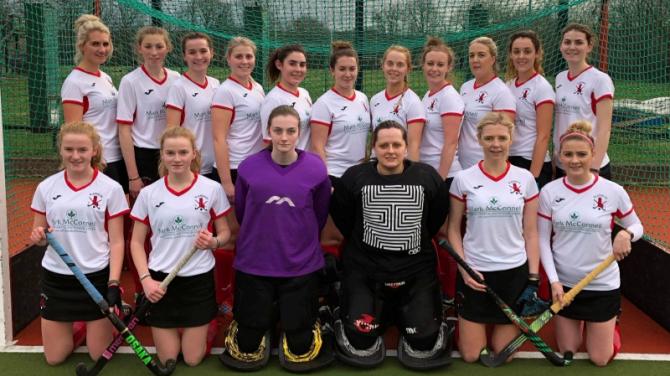 IT was heartbreak for Raphoe 1st XI Ladies on Saturday, when their first defeat of the season came at the hands of neighbours Omagh, in the Ulster Senior Cup Final.

Raphoe will look back on the 2-0 defeat and will undoubtedly be disappointed with their performance on the day.  Having drawn with Omagh a few months ago in the league, and both teams sitting joint top of the Senior 1 League, it was a known fact that whichever team took their chances on the day, would be the club taking home the silverware.

Raphoe started the game strongly and had a good opening ten minute period.  The Tinney and Patterson combination in midfield were working in sync and were managing to place the ball through gaps for Leanne Patterson and Lisa Smyth to run on to upfront.    However, small mistakes started to creep in, Raphoe's confidence started to dip and Omagh started to find their form.

Omagh were playing a high press game and Raphoe's Sabrina Barnett was struggling to get the ball out of defence for her team.  Omagh were quick on the counter-attack and were unlucky not to open the scoring early in the first half, only for Heather Humphrey in the Raphoe goals managing to get a touch on the ball and putting it wide of the post.

The first half ended 0-0, which both teams would have been regretful about, as there had been chances at both ends of the field, that summonsed gasps of relief and frustration from players and supporters.

The second half got underway with Omagh coming out the more composed of the two teams.  Kilpatrick, Wray and Nelson were playing well in defence for Raphoe and were called upon on a few occasions to make crucial interceptions.  But unfortunately for Raphoe, Omagh opened the deadlock with 15 minutes left in the game.

Omagh won the ball just inside Raphoe's half, and caught some of the Raphoe players flat footed.  The Omagh midfielder drove forward at pace, and found her fellow attacker in the circle, who  sweetly swept the ball first time against the Raphoe backboard.

Raphoe tried to get a bit of momentum going again and were unlucky not to equalise shortly after conceding.  Wendy Patterson had found herself in a one-on-one opportunity with the Omagh goalkeeper, but the in-form keeper pulled off a superb save to keep her team in front.

Omagh sealed the game and victory with just five minutes to go, when they netted their second goal.  Raphoe were unhappy with the second goal, as they believe the ball had hit an Omagh foot before entering the circle.  Following an appeal to the umpire, the goal stood as neither umpires had not seen the foul.  With the second goal now on the scoreboard for Omagh, the remaining time slipped away too quickly for Raphoe and their dream of winning the cup was gone.

Raphoe will be disappointed in the result, but on the day, Omagh were the better team and deserved the win.  With having only played six out of 18 games in the league and having an Irish Cup quarter-final at the end of January, the Raphoe girls will now regroup and aim to come out battling again at the start of 2019.