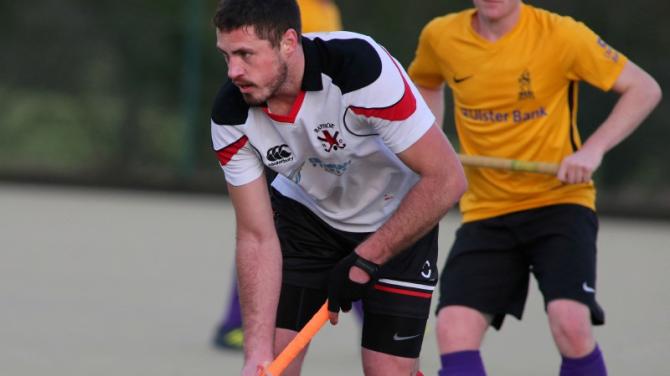 RAPHOE 1st XI welcomed title contenders Instonians to the Royal and Prior grounds on Saturday where both teams played an entertaining game for the home crowd.

The game got off to a poor start for the home side, conceding a goal in the opening two minutes. Instonians worked the ball down the right wing and the Raphoe defence allowed the attacker to run along the end line before playing a simple pass to a fellow team mate to find the bottom left corner of Davy Moore's net.

Raphoe were furious at how they conceded as it was highlighted in the team talk before the game. It wasn't long though until Raphoe got their equaliser when some good individual work from Keith Meehan in the Inst quarter of the pitch.

He ran at the defence and won his team a short corner. Raphoe’s first clear chance to get a shot on their opponent's goal and with Simon Goudie picking up an injury early in the match up stepped school boy Tom Eaton, who made no mistake from the top of the circle with a power shot straight down the middle, catching out the Instonian keeper who  couldn't get his feet sorted quick enough.

Raphoe started to settle down and began to work the ball out of the defence with some lovely pass and move from the Raphoe defenders and midfielders.

Both teams had chances to take the lead through short corners. The Raphoe defence stood strong and Davy Moore was proving hard to beat in the Raphoe goal.

Tom Eaton had another chance from a short corner but couldn't recreate his opening goal as he shot just wide of the post.

Raphoe got another short corner when a great counter from a defensive short corner was cleared. Raphoe broke and George Patterson played in Jonny Long down the side of the Inst defence and won the foul of the defender. Raphoe couldn't make the most of this opportunity.

Instonians took the lead soon after through a short corner which the Raphoe defence struggled to clear after the ball came off the upright, it was like pinball in the Raphoe circle and Inst managed to force home from close range despite the efforts of the defence. The half ended 2-1.

Instonian started the second half quicker and pressed Raphoe right back into their own 23 metre. This started to rattle the Raphoe players and some of their great play was lost as they tried to get through this difficult stage.

The home side got back into the game and began to settle when captain Evan Lyttle was green carded seeing him off sent for two minutes.

This set the tone for the match for the next 10 minutes with both teams making rash tackles but the umpire’s decision to card Tommy Orr for a 50/50 tackle made the Raphoe players feel like it had become a little one sided with some of the calls by the official.

Raphoe battled on and kept creating chances with Jonny Long making a weaving run down the left wing and managed to get down the end line into the Inst circle and send the ball towards the goal but the Inst defence cleared their lines.

Raphoe kept the press, trying to force the Inst defence into a mistake at the back, Instonians held out and took the three points back up to Shaw Bridge.