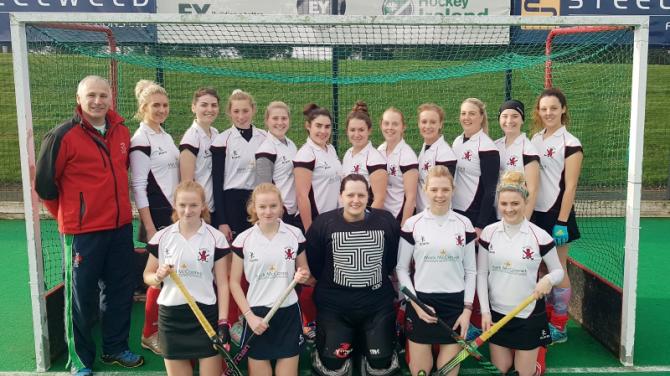 ON Sunday, Raphoe 1st XI Ladies travelled the short distance to the neutral venue of Cookstown to take on Club KV in the Ulster Senior Cup semi-final.

Raphoe had come out on top when these two teams meet in the Senior 1 League last month but it certainly wasn't one way traffic this time around. From taking an early lead, to going in 3-2 down at half time, to equalising in the final minutes, Raphoe certainly kept their coach and supporters on the edge of their seats.

Raphoe opened the scoring in the first 10 minutes of the game. High tempo attacking for their forward line of Lisa Smyth and Leanne Patterson drew a foul inside the KV circle and a short corner being awarded to the Donegal side.

A well executed strike from Wendy Patterson at the top of the ‘D’ bobbled over the KV defenders stick where Sabrina Barnett was waiting eagerly to direct the ball over the goal line. Unfortunately, Raphoe weren't able to hold on to the lead for long, as within five minutes KV got themselves back in to the game.

Some excellent passing between KV's midfield and forward line got them in to the Raphoe circle where one of their forwards took a chance at a reverse stick shot from a tight angle and sweetly sent the ball high in past Heather Humphrey in the Raphoe's goals.

This goal didn't unsettle Raphoe as they remained calm and focused. Arlyne Kilpatrick and Zara Tinney worked well together down the right hand side of the pitch interchanging during attacking plays and getting the ball inside the oppositions ‘25’.

Raphoe won another short corner and it was young Amy Wauchope who put Raphoe in front again. Barnett stood up to take the direct shot in the set piece routine and Amy got herself in to the right position at the right time to divert the ball in between the KV keeper and defender.

With Raphoe now in front again, and with less than ten minutes until half time it would have been an acceptable time for them to ‘shut up shop’ and take themselves in ahead at half time - but Club KV had other ideas.

KV started to get momentum going and were causing Raphoe problems with their counter attack. As Raphoe’s midfield pressed high, KV found an opportunity to break down the middle of the field and into the Raphoe circle.

A KV player reached the ball at the top of the ‘D’ before Raphoe could get to it and she pushed it through the legs of the advancing Raphoe keeper to bring the game level again.

This goal seemed to shake Raphoe slightly and lifted the spirits of KV who pressed hard and took the lead for the first time in the game just before half-time. KV attacked down Raphoe’s left hand side and as they caught Raphoe ball-watching they slipped the ball across to an unmarked player on the back post who slapped it nicely against the Raphoe backboard.

While Raphoe were the better team in the first period, an unsettled final ten minutes left them trailing by 3-2 at the half time whistle.

After a focused team talk from coach Richard Tinney, the Raphoe girls came out hard in the second half and hungry for that spot in the final next month. Raphoe started to dig deep and fought hard to get themselves back in the game.

The defence of Kilpatrick, Barnett, Wray and Nelson were well set up and handled any attacks that came their way leaving Humphrey’s with nothing to do in the second half.

But the KV defence were just as well set up and their goalkeeper pulled off a few saves to keep them in front. Wendy Patterson and Lyndsey Tinney worked tirelessly for Raphoe in the centre midfield role switching the ball from left to right in search of an opportunity for the equaliser.

Eventually the equaliser did come for Raphoe with just two minutes left on the clock. The goal came through another short corner routine where Barnett, hammered the ball from the right in past the near post and took her team in to the penalty shootout.

It was now down to the eight second penalty run-ins where the result could have gone either way. It was all level after five run-ins each with Leanne Patterson, Wendy Patterson, Sabrina Barnett and Victoria Wray all scoring.

With sudden death now on the cards, KV were first to run. Humphrey stayed tall and with quick feet she managed to force the shot wide, putting her team on the cusp of victory. The Raphoe players, coach and supporters all held their breathe as they watched Leanne Patterson step forward for her second run-in.

Unnerved, Patterson used her speed and skill to round the KV keeper, securing Raphoe a spot in the Ulster Senior Cup final against Omagh on December 29.

The ‘Player of the Match’ for the local side was Leanne Patterson Next week, Raphoe have more cup action, where they will take on Weston from Dublin in the last 16 of the Irish Hockey Trophy. Push back is at 1pm in Raphoe and all support would be greatly welcomed.