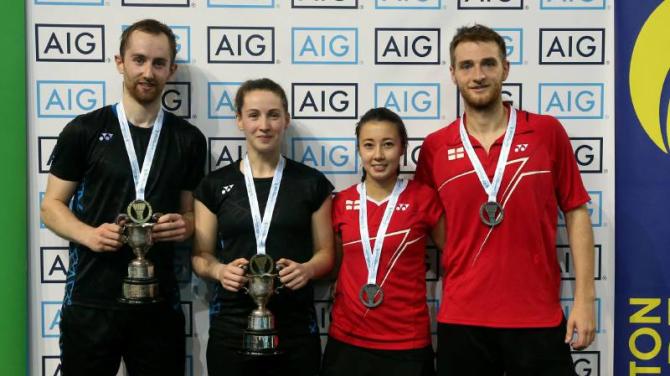 Having lost the final last year, the Donegal duo had unfinished business in the competition, and with the event selected for live TV this time around, the pressure to deliver the cup was even more intense.

Watched on by their friends and family, Chloe and Sam produced a straight games win (21-13, 21-12) over English duo Harley Towler and Emily Westwood to become the first Irish winners at the tournament since Scott Evans’ singles triumph in 2012.

It also brought Chloe’s long-awaited search for a second Irish Open final victory to an end, after she previously claimed the women’s doubles title (alongside Bing Huang) in 2007.

"It means more to win the mixed competition, and to win it with Sam is very special. To win the Irish Open is something every Irish player wants to do, so to have our names on that cup is nice," delighted Chloe told the Strabane Weekly News.

"I don't think it is one of our best wins, but I think it's one of our most special victories and one I will remember for a long time."

Coming into the tournament as favourites brings its own challenges as each of their opponents stepped up their game, but the Raphoe pair performed admirably to secure their title.

"We knew there was no one in the competition we couldn't beat, but at the same time we knew there were players who would beat us if we didn't perform," said Chloe.

In Thursday's round one match, the siblings comfortably overcame up-and-coming French pair Samy Corvee and Margot Lambert, winning both sets, though it wasn't all plain sailing as they set up a quarter-final clash with Norwegian pair, Carl Christian Mork and Solvår Flåten Jørgensen. Again, the deadly duo won the match without dropping a set, winning  21-15 and 21-13.

"Both matches were tricky, but we kept our speed and tempo high and we were able to make it to the semi-finals," reflected Chloe.

Their opponents in the last four were tough English pair, Harley Towler and Emily Westwood, but again the Magee's made light work of their rivals, winning 21-13 and 21-12.

"We played at a really high level in the semi-finals; probably the best we performed all week. It was nice to win convincingly against a good pair," said Chloe. "On Friday night we were so happy to have played well."

Such an emphatic display gave the pair great confidence ahead of Saturday night's final, but Chloe admits the level of coverage and interest in the match made her a little nervous.

"It was live on TV, there were so many people watching - lots of other wee things that have never been at an Irish Open before - so it did play on our minds a bit, but we were able to go out and get the victory," she said.

"We knew we had to play well and keep our tempo high – and  we were happy with our performance."

Spurred on by a vocal home crowd, they accumulated six consecutive points to move into a 19-11 advantage, and held off an attempted fightback from Towler and Westwood to ultimately secure the opening game.

While Chloe’s volley against the net cut their cushion to 14-11 deep into the second game, they immediately broke their counterparts’ resistance with five points in quick succession.

This was a catalyst for them ease over the line - adding to their impressive bronze medal finish at last year’s European Championships.

Chloe continued: "It was a first for Ireland that the TV cameras were there and that was huge for badminton in Ireland to get that level of coverage.

"We play in other tournaments across Europe on TV, but this felt different: we knew our friends were watching, and it was difficult. The pressure was a little bit more but it was all worth it in the end."

With the Scottish Open taking place this week at the Emirates Arena, however, the celebrations were short-lived.

"I stayed in Dublin on Saturday night, but Sam went home to Raphoe and there were quite a few celebrations, but we had to keep it to a certain level as we are going to Glasgow for the Scottish Open on Tuesday.

"It all starts again. We had Sunday off but it was back to training on Monday morning."

Asked if it was difficult to regain focus again after such a huge victory, Chloe said: "With the Irish Open, there is so much to the week. It's a week of high intensity.

"You feel so tired at the end of it, not just from badminton but from everything else. It is tough to get back up and running. This week is a step-up in level, though, and we are going to have to be ready for round one. We have been there before, so we need to be really ready on Thursday.

“We just want to get over there now, get settled in and see what the week has to give.”