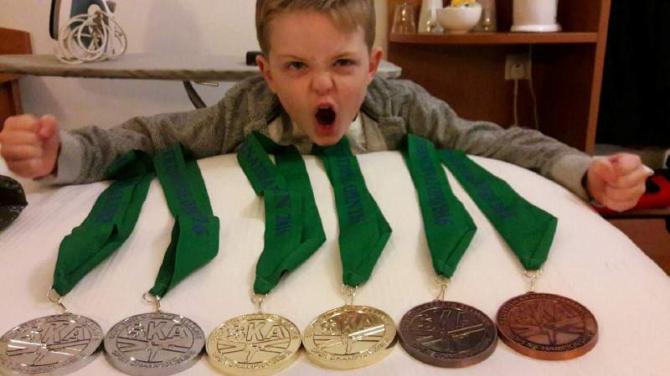 A LOCAL schoolboy is making quite a name for himself in the karate world.

Young Lucas McColgan – who currently holds a number of titles to his name - has just returned from the trip of a lifetime.

The eight-year-old spent a week in Malta representing Ireland at the WUKF European Karate Championships where he won a bronze medal in Kumite.

He also made it through to the finals of Kata where he placed sixth out of 17 competitors - a massive achievement on the European stage.

Lucas, a primary five pupil at St Mary’s Primary School here in the town, also represented Ireland at the WUKF World Karate Championships back in June where we won a silver medal in Kumite from a category of almost 50 competitors - not bad for a wee lad from Strabane!

Speaking this week, Lucas’ proud mum, Kerry, explained that despite his young age, her son already boasts a number of medals to his name.

“Lucas first competed at world level in October 2017 at only seven years-old where he was part of the largest ever Ireland team to compete at the IKU World Karate Championships but he did not let his age phase him as he went on to win a bronze medal in Kata and a silver medal in Kumite,” Kerry said.

“Additionally, Lucas also travels around Ireland and the UK competing at both local and national level where he has achieved eight gold, four silver and three bronze medals at seven competitions from January 2018 until present.”

The talented youngster began karate over three years ago in February 2015 and started competing in September 2015.

Overall he has competed at 27 local and national competitions in this time - winning 24 gold, 24 silver and 14 bronze medals. He was also the inaugural winner of the Strabane Future Champions Cup in May 2017.

Lucas is a member of the North West Shotokan Karate Club and trains two nights per week with the club -  Monday in Clady Community Hall and Wednesday in CAKE Centre Killygordon.

Since July this year, he has also been training at JD's Boxercise classes on Tuesday and Thursdays in Fountain Street Community Centre which, Kerry says, “has helped massively with his hand speed for Kumite”.

“Lucas also trains an additional two times at home with his father Eathan or uncle Sloan focusing on his fitness levels and perfecting his Katas. Lucas really enjoys karate and all the hard work is certainly paying off,” his mum added.

His most recent success came at the WUKF European Championships when Lucas took to the mat on Friday, October 26, in his first category - individual Kata. He performed the Heian Nidan Kata excellently allowing him to progress to the finals where the top eight in the category competed against each other.

“Unfortunately the standard was extremely high and he did not win a medal. But placed sixth out of a category of 17 competitors - an excellent achievement for his first European Championships,” his mum explained.

“On the Saturday when the Kumite categories took place as usual it was going to be no easy category for Lucas with a total of 25 competitors in the ‘Children All Belts 8 years Open Category,” Kerry added.

In his first fight Lucas beat Wales 4-0, in the second fight he beat Scotland 4-1 and in third fight he beat Italy 4-1 allowing him to progress to the semi-finals where he faced a fighter from Romania.

The Strabane boy went two nil down in this fight but brought it back to 2-2. Kerry added: “Lucas was fighting really well but unfortunately the Romanian scored an Ippon taking the scoreline to 4-2 and winning the fight meaning Lucas finished in third place lifting a bronze European medal.”

In October 2017, he secured the first of his two world medals when he competed at his first ever IKU World Championships. The only Irish boy in the category, he did an excellent individual Kata earning himself a place on the podium and winning his first world bronze medal. This was followed by a silver in individual Kumite.

Lucas competed in the WUKF Worlds in Dundee in June past and tasted further success. Taking to the mat on June 15 for the individual Kata he made it to the top six in the category, eventually finishing in fourth place - just 0.2 points below the person in third place and missing out on a medal.

On the second day, he fought in the U11 team with teammates, Ryan McCourt and Christopher Cunningham, from Castlewellan. The boys made it to the quarter finals where they were beaten by Romania - who went on to win the category – again just missing out on a medal.

However, it was not entirely disappointing for the youngster. During the main event – the individual Kumite – the Strabane boy turned in quite a performance.

Kerry said: “What a show from our boy. I think it’s fair to say his medal was well earned. Forty-five competitors took to the mat and fought tirelessly round after round for the guts of two hours.

“Six fights later and Lucas found himself in the final his seventh fight of the day where he was narrowly beaten by another brilliant wee fighter from England. It’s not every day a wee 8-year-old from Strabane wins a silver world medal taking his tally to three world medals in just eight months!”