Raphoe and Omagh ladies share the spoils in local derby 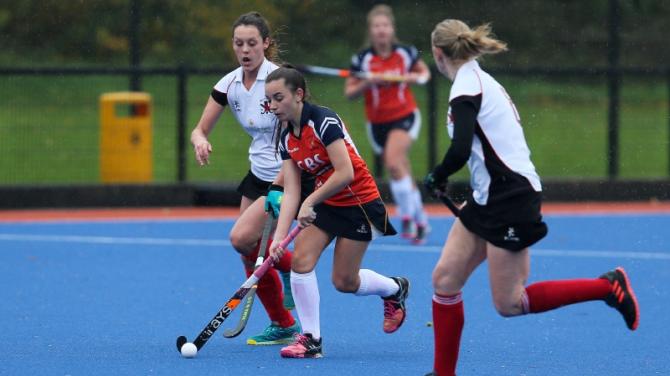 Having had their opening league game postponed last week because of Irish Cup action, the Raphoe girls were keen to get the league up and running.

Following a pitch inspection, the Raphoe Royal and Prior pitch was deemed unplayable following heavy rain that morning, but thankfully the Omagh Club agreed to reverse the fixture and the Raphoe girls made the journey to Omagh.

The local rivalry between Raphoe and Omagh always guarantees an eventful game and Saturday was no different to any other occasion that the teams have met.

The opening half of the game was fast and furious, with both teams having good flowing periods of hockey. Raphoe started the stronger of the two teams but were unable to convert any of the chances that came their way.

While pressing high to find the opening goal of the game, Raphoe on occasions, left their netminder, Heather Humphrey, exposed to dangerous one-on-one situations with the Omagh forward line.

Humphrey pulled off numerous saves to keep her team in it, but mid-way through the first half the exposure in the Raphoe defence was too much for Humphrey to deal with on her own. Humphrey saved the initial shot from the Omagh forward but as the ball returned back out to the Omagh player, she squared it to her teammate on the back post, who slotted it nicely in to the Raphoe goal.

Raphoe fought hard to get back in to the game but Omagh remained the stronger of the two teams in the finishing period of the first half and kept their one nil lead until half time.

After a serious team talk from coach Tinney, the Raphoe girls were determined to come out stronger in the second half and get themselves back in to the game.

However, Omagh had the exact same intention and it was them who started the stronger of the two teams. Within the first ten minutes of the second half, Raphoe found themselves to be two goals down, when Omagh won a free outside the Raphoe 25 yard line.

Omagh played a nice quick ball in to the Raphoe circle. This ball deflected off a Raphoe stick and it fell to an Omagh forward who knocked it past the Raphoe backline.

Being two nil down didn't dampen the Raphoe spirits and they were determined to get themselves back in to the game.  Their efforts were rewarded when a well worked short-corner routine saw Victoria Wray get her team back in to the game. Wendy Patterson controlled the ball at the top of the circle and found an unmarked Wray. Wray's shot on goal deflected off an Omagh defender and rattled off the back board.

With the scoreline now 2-1 and it being a local derby tensions were running high. Both Raphoe and Omagh seen themselves go down to ten players at times with mistimed tackles and debates about umpiring decisions seeing the appearance of green and yellow cards.

Both teams were still hungry to score more goals, and luckily for Raphoe, Humphrey continued her fine form from the first half.

Raphoe pressed hard to find an equaliser and their teamwork was rewarded when Zara Tinney found Leanne Patterson down the right wing.

Patterson made an excellent run into the Omagh circle and having been forced to her weak side, Patterson took the chance at a reverse stick shot from an acute angle and saw it deflect off the goalkeepers pad into the Omagh net.

With only ten minutes left in the game, and the scoreline at 2-2 both teams fought hard to find the winning but to no avail, and they had to settle with sharing the points on this local derby occasion.

Player of the match for Raphoe was awarded to Heather Humphrey for her outstanding performance in nets.