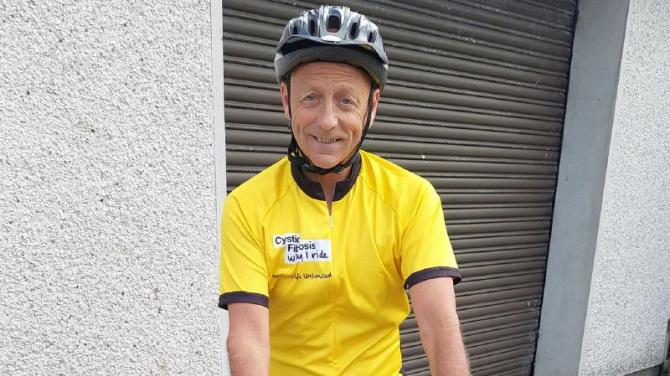 A CASTLEDERG Cystic Fibrosis (CF) ambassador who has raised over £320,000 in sponsorship from running marathons has had to pull out of the London Marathon due to a health condition.

'Marathon Man', Liam McHugh, 60, has been diagnosed with a condition called Haglunds Deformity which has left him with lumps on the heels of his feet.

He has lived with this for some 10 years but it has gradually gotten worse with time and thousands of miles ran on the roads with marathon training.

Liam explained to the Tyrone Constitution: "The pain has been around five out of 10 for a few years but over the last six months it has increased and is now around nine or 10.

"It has just got unbearable. It feels like a red hot poker stabbing through my heels with every stride. Its so annoying because physically I'm exceptionally fit for a 60-year-old and if it wasn't for these heels I'd be in great shape."

Mr McHugh's running journey started when his daughter, Rachel, was born with Cystic Fibrosis 30 years ago.

Since then he has taken part in numerous marathons including, Belfast, Dublin, Newry, New York and London, which Liam confessed has been special place for him.

"The London Marathon is on October 2, which is the day after my 61st birthday and I'm totally gutted as I've taken part in the VLM since 2010.

"It's become such a great fundraiser for me for Cystic Fibrosis and has been part of my life.

"London has been special for me every year because of the occasion and meeting up with so many people running for CF that they tell me that I inspired them to take up marathon running.

"Myself and my wife, Eleanor had our flights booked a long time ago so not sure what to do now about heading over to London.

"Maybe we will go and join in with the CF Trust support teams which has several different teams of supporters to cheer the runners on the route."

And so far he has raised an incredible £326,000 for the Cystic Fibrosis Trust and seen so many positive benefits because of the money raised.

Two years ago history was made in Northern Ireland when an agreement was made to approve life saving drugs which has transformed so many lives.

"The support I've had from the public over the years has been second to none. I cannot thank them enough. Without each and everyone of them all of this wouldn't have been possible," he added.

Treatment for this condition has varied following visits to Musgrave Sports clinic, orthotics made for his feet, steroid injections, anti inflammatory tablets and physio which was keeping it at bay but now it's come to a head.

And although deflated from this challenging setback Liam is determined not to stop just yet.

"I can't stop yet because there's still more work to be done. Unfortunately there's still just under 10% of people with CF that still don't have any drugs.

"There's around 2,000 different mutations of the condition so the new drugs like Kaftrio are not suitable for everyone. I can't stop until everyone can avail of life saving drugs.

"I've now started cycling as I'm pain free from it to try and stay fit as I think I'd be completely lost without some form of fitness and exercise seeing as I can't run.

"My plan is to keep at the cycling and hopefully start to enjoy it and then see how my heels are doing after a complete rest from running until the new year.

"If I can't go back to running because of my injuries maybe I can then consider creating a new cycling fundraising challenge to take its place. Watch this space," he added.