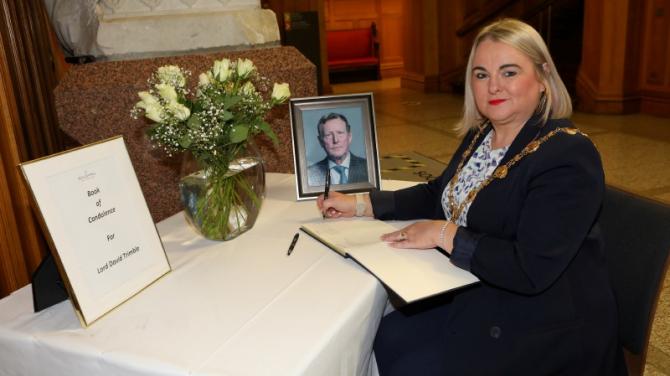 CONDOLENCES were sent to the family of Lord David Trimble by Derry City and Strabane District Council following his passing at the age of 77 following a short illness.

The Unionist politician was one of the architects of the Good Friday Agreement and served as the inaugural First Minister of Northern Ireland.

At Thursday's monthly meeting of the local authority, Mayor councillor Sandra Duffy said: “We have opened books of condolence and I would encourage as many people as possible to come in and sign it as they can.

“David Trimble, in terms of peace and in terms of the Good Friday Agreement, worked very hard to ensure that it happened and took many chances that maybe he paid for in different ways.

“I would like to record my condolences to his wider family and to the Ulster Unionist family on their loss at this time.”

UUP Alderman Darren Guy also offered his condolences to the family: “David obviously took a lot of risks as we know but he had a vision for peace.

“It didn’t go down too well with some people and it probably cost him his position but he was steadfast that this was the way we needed to move forward and we needed brave men at the time to take decisions like that.”

Recalling his memories of Lord Trimble, Alderman Derek Hussey added: “Most people will have seen the Noel Thompson interview and the fraught nature of it.

"David was that sort of character undoubtedly and Noel Thompson wasn’t the only one to have that sort of engagement.”

Aontú councillor Emmet Doyle described it as ‘"fitting and right" that the council offers condolences to the wider Trimble family.

He said: “I met David a number of times as a politics student way, way back and it’s easy to forget the contribution he made given where we are now, alongside people like John Hume and Seamus Mallon.

“For students of history and people who have an interest in our political history here like myself it will be something that will be keenly felt because he was one of the most outspoken politicians and one of the most familiar faces and voices we saw and heard on the radio when we were growing up through all the difficulties that we had.”

“It was only after his passing and when watching the news you have the understanding of the pressure that the man was coming under.

"He did it, I believe, for the right reasons and now our children have the benefit of growing up in peace which was really hard fought for.

“David Trimble obviously worked very closely with the leadership of the SDLP leadership at that time and won the Nobel Peace prize with our former leader John Hume, which was a very fitting tribute for both men.”

On behalf of Sinn Féin councillor Michaela Boyle offered her party’s condolences to the family and wider circle saying: “David Trimble, as others have said, made a significant contribution in terms of the Good Friday Agreement and to the peace process, something I’m sure his family are very proud of.

“We should not underestimate the work that he and other political figures in this city achieved in bringing about peace.”

Concluding, Alliance councillor Rachael Ferguson said: “He was a figure and a name that will be recognised as one of the reasons me and my children and generations of children will live in peace.”