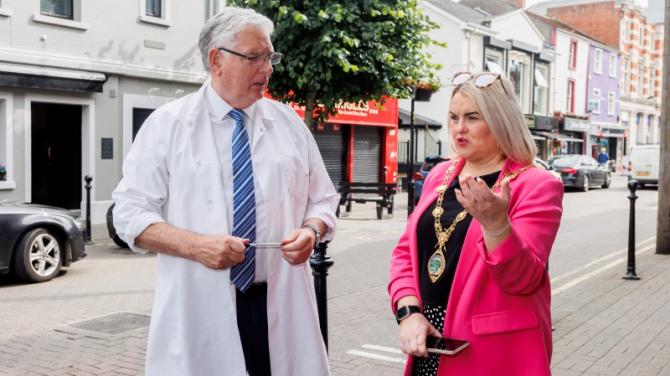 COUNCILLORS have agreed to hold a special meeting to discuss the impact of the recent flooding across the district.

During Thursday's full monthly meeting of the local authority, the SDLP's Brian Tierney proposed that council will invite all relevant stakeholders with responsibility for recovery and mitigations to address the special meeting with their plans to address the ongoing problem in hotspot areas across the area.

"Council understand the concerns of local residents, businesses and others who have been impacted by recent floods and will now monitor the progress of flood mitigation's in affected areas by having a standing flood report on the Environment and Regeneration committee," the proposal added.

It received the unanimous backing of council.

Last month, businesses and homes across the city and district were once again left counting the cost of widespread damage following torrential downpours which led to flash flooding

In Strabane, the Ballycoman Estate, Pearse Gardens, Carlton Drive and Bridgend areas were among the worst impacted.

The Met Office estimated that 70mms of rain fell in the area in five hours on Saturday evening, July 20, putting it on par with August 2017 when some 60 to 70mm of rain fell over an eight to nine-hour period, resulting in the flooding of around 400 properties.

At Thursday's meeting, it was also agreed to write to the Health Minister asking him to update the protocol for emergency services in the event of flooding.

“The flooding was devastating for so many families and individuals," said Mayor Duffy who visited some of those impacted in the aftermath.

“I was able to get out and around quite a few areas on Sunday and then into Strabane on Tuesday.

"It was absolutely heartbreaking to see the devastation in some of those homes.

“I know some of these families have been affected two, some three times and to me that is just devastating for them.”

During the meeting some councillors were also critical of the Department for Infrastructure's (DfI) response to the flooding, while council workers were praised for their swift response with councillor Tierney describing it as "second to none".