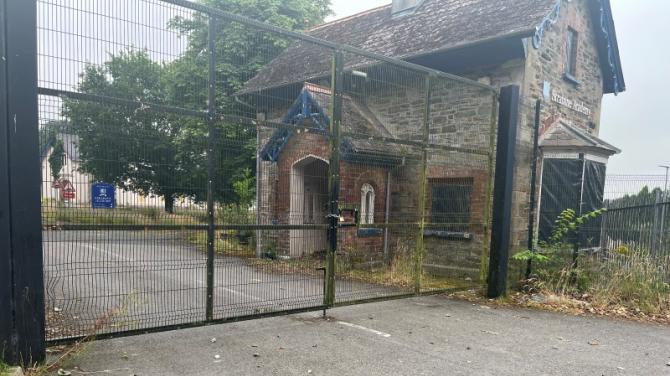 THE Education Authority (EA) has confirmed temporary security measures will be reintroduced at the former Strabane Academy grounds.

The Liskey Road site has become a magnet for anti-social behaviour since the school's move to a new multi-million pound campus on Derry Road in 2020.

An arson attack on derelict building within the grounds earlier this month caused widespread damage, fuelling fears for the future of the historic Milltown House and Gatehouse buildings on the site.

The incident was the latest in a string of reported fires and vandalism at the site, while there have also been reports of young people gaining access to the site and using it as a drinking den.

In the wake of the fire, local politicians have called for immediate steps to secure the former school grounds.

While the main building and portacabins have been demolished, the historic Milltown House and Gatehouse remain.

Their close association with the renowned hymn-writer Cecil Frances Alexander, who composed classics such as ‘All Things Bright and Beautiful' and 'Once in Royal David's City', has led to calls for the site to be protected and brought into community use.

A spokesperson for the EA confirmed that steps have now been taken to help prevent access to the site.

"The EA is disappointed that it’s property has recently been subject to unwarranted vandalism," the spokesperson said.

"The EA appreciates the historical significance of old school buildings to the local community and has therefore introduced additional temporary security measures to ensure that no further damage is caused."

West Tyrone SDLP MLA., Daniel McCrossan, previously warned those targeting the site :"Every match you strike is setting fire to and destroying an important part of the fabric of this area.".

He has been urging the EA to take immediate steps to secure the future of the former school site in the wake of the incidents.

"After recent arson attacks on buildings at the old Strabane Grammar School site, I have demanded security is immediately reinstated to protect the buildings and ensure public safety," he said.

"I am delighted that the Education Authority has confirmed that security will return to the site with immediate effect.

"I have also asked for urgent action on finding a long-term, sustainable solution for this important site and will continue to work to see that happen."