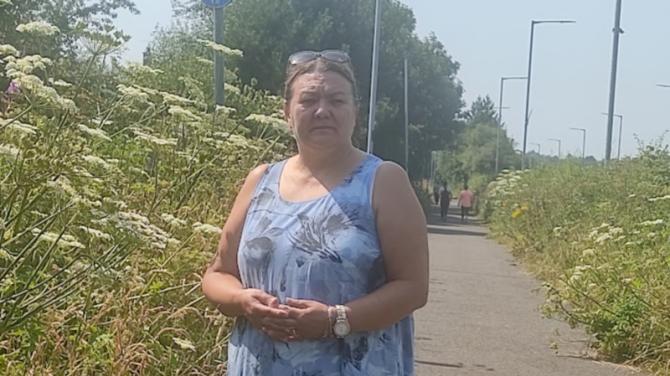 CALLS for action to treat a dangerous and invasive plant present on some of the town's main throughfares have intensified this week with one local councillor warning it's only a matter of time before someone is seriously hurt unless immediate measures are taken to eradicate its growth.

Locals are also being urged to be vigilant to the areas where Giant Hogweed is growing.

Commonly found close to river banks where its seeds are transported by the water, the plant has been found growing in several areas throughout the town and there are now concerns that it may have spread to the busy ‘Highway to Health’ pedestrian path which runs from the junction of Urney/Great Northern Road and Bradley Way in the town.

In recent weeks it has also been found growing along the Lifford Road, Castletown Court and Fountain Street.

The highly toxic plant is not native to these shores and is extremely dangerous to anyone who comes into contact with it, causing severe burning.

Strabane Sinn Féin councillor, Michaela Boyle, says she has been in contact with Derry City and Strabane District Council and Department for Infrastructrure (DfI) officials pressing for urgent action to be taken to treat the Giant Hogweed.

Roads officials have confirmed a meeting will be arranged to inspect the 'Highway to Health' route, amid suspicions that the plant may in fact be Common Hogweed which is not poisonous.

She said she had been contacted by people who use the path on a regular basis who are concerned that the plant is "now flourishing on this busy route."

"This is posing a serious health risk, evidenced by the many serious injuries that have been caused to children and adults alike coming into contact with the toxic sap of this plant," councillor Boyle said.

“I therefore have been in contact with council and Roads Service officials pressing for urgent action to be taken to treat the Hogweed so that its wilts and removes the imminent danger it is currently posing."

She continued: "I have also requested council to give a general cut back to the wider path which has become very overgrown.

“Roads Service has cut back and treated the verges along the bypass very well this year but this pedestrian path needs similar attention as it forms part of the Highway to Health pedestrian/cycle route in the town."

For its part, DfI confirmed an inspection will be arranged.

“The department can confirm it was contacted by councillor Boyle and will arrange for an inspection subject to available resources," a spokesperson said,

First introduced as an ornamental plant in the 19th century where it escaped and naturalised in the wild, each Giant Hogweed plant can produce up to 50,000 seeds which can survive for up to 15 years.

If the sap gets onto your skin and then you are exposed to sun, your skin can blister badly and blistering can recur over months and even years. This is known as phytotoxicity.

A spokesperson for Derry City and Strabane District Council said it will deal with the plant when it is found on council-owned land.

"Council is aware of the risks posed by Giant Hogweed, and the presence of the species in these areas of Strabane," a spokesperson said.

"Where Giant Hogweed lies on private land or land owned by other statutory organisations it is the legal responsibility of the landowner to control it.

"Council can signpost to information on how to effectively identify and manage the problem."

For further information and how to report sightings of Giant Hogweed visit: