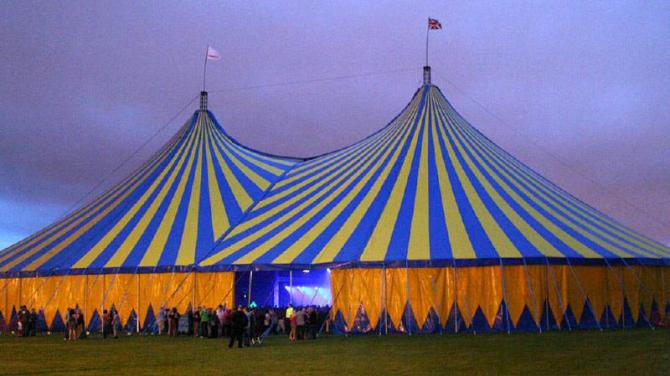 The renowned yearly event, which is known for breaking the norm and bringing big name acts to the small town of Castlederg, will this year take place in a massive 'big top' tent, ensuring an unforgettable festival experience whatever the weather.

This fantastic centre-piece of the festival allows for improved production, first-class lighting and effects, and of course, shelter from the summer showers - which as anyone from Castlederg will know, are never far away.

The much-anticipated festival takes place from Thursday, July 28 to Sunday, July 31, at the established venue of Castle Park Castlederg, and promises to bring some of the biggest names in the music scene the town.

DergFest has been running since 2015, save for taking a break in 2020 due to the pandemic. Previous headliners include UB40, Westlife’s Shane Filan, Judge Jules, Toploader, Chesney Hawkes, Dave Pearce, Mundy and many more.

And having returned last year albeit with Covid-19 restrictions, this year's event now promises to be bigger and better than ever.

Proceedings will kick off on the Thursday with NI’s biggest Teenage Festival Night. Designated for Secondary School ages, festival organisers felt it was important to add a night for this demographic this year. This event is strictly alcohol free. Due to licensing, the other festival dates are 18+.

To ensure safeguarding of attendees, ticket sales for this event is online only, to allow the organisers to collect details of parent or guardians for welfare reasons.

On the Friday, country will come to the castle, with singing sensation Derek Ryan back by popular demand to make a hat trick of headline slots. Derek has sold out his shows on two previous DergFests, and is a firm favourite amongst fans near and far.

On Saturday, the genre will take a shift for the festival's headline night. World renowned DJ, Sigma, will take to the Dergfest stage, along with KC Lights and Kissy Sellout. Suffice to say, this year's Dergfest has once again been successful in attaining big international names, thus continuing the bragging rights of bringing world-class acts to the town.

The unforgettable festival will come to a close under the 'big top' on Sunday, when Europe's number one Queen tribute, 'Qween - It’s a Kinda Queen', take to the stage for a massive catalogue of hits.

Fresh from playing to 10,000 at last weekend’s 'Forever Young' Festival in Dublin, the immensely popular tribute act will be joined by special guests on the night ‘The Human Touch’, a Bruce Springsteen Tribute Band, fronted by US Navy Veteran ‘Monte Thompson’, who performs with an incredible authenticity to the Boss.

The Festival will be closed out by local lads and firm Castlederg favourite, 'The Logues', as they hit the stage to bring down the curtain on a massive weekend.

Tickets can be purchased by visiting www.dergfest.co.uk, or buy direct from the four organising Bars, Micky Joes, Logues, The Derg Arms and the Townhouse Venue.