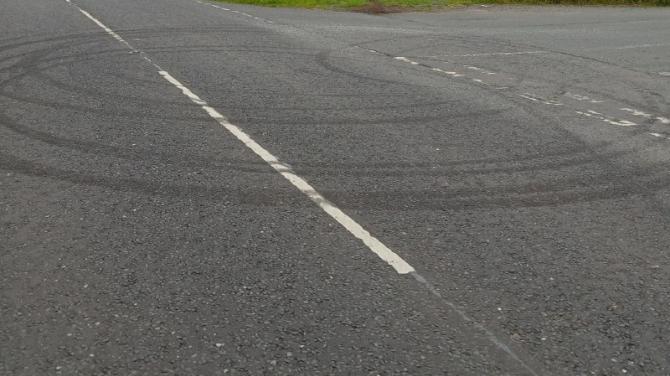 WEEKS after police issued a warning about anti-social driving in north Tyrone, calls have been made for those involved in similar actions at other rural junctions in the district to rethink their actions.

In recent weeks, residents living at junctions including outside Castlederg and on the Drumlegagh Road South, have been disturbed often late at night by drivers performing unsafe manoeuvres including donuts.

The risky performances are often accompanied by excessive 'revving' of loud engines, causing distress to elderly residents and young families, all while leaving behind a trail of tyre markings, causing damage to road surfaces.

Speaking following similar incidents in the Bready and Burndennett area, police warned not only are the drivers involved causing a nuisance, but someone could end up seriously injured

"Driving on the public road brings with it certain responsibilities to the drivers and passengers; to their families and friends and to the community as a whole," a police spokesperson said.

"These responsibilities should not be taken lightly. It is important to point out that drivers should expect to receive a fine or worse, prosecution through the courts, should they be detected engaging in careless or dangerous driving .

"This is a serious matter. This type of dangerous driving may result in serious injury or worse.

"Your tyres may become worn more quickly, affecting your car’s ability to stop in an emergency.

"There is a chance that you, your passengers or innocent road users could be seriously injured, or even killed. We see too many deaths on the roads in Northern Ireland."

West Tyrone DUP MLA., Tom Buchanan, says the manoeuvres could easily result in loss of life, and cause unnecessary damage to an already deteriorating road network.

"I have been contacted in recent weeks by local individuals who have been disturbed and distressed by a select few drivers who are insistent on wreaking havoc on our roads," he said.

"They have been seen performing donuts and other unsafe manoeuvres at various locations, which are often rural and out of the way.

"These manoeuvres serve no purpose, other than endangering life and causing immense annoyance among local residents.

"Yes, it might sound fun until an accident happens and serious injuries are caused. We must also think about the damage that this kind of thing is doing to our local roads - I think we can all agree they are in a poor enough shape already without this kind of unnecessary damage.

"In recent weeks I have seen police in other districts commit to cracking down on this kind of anti-social driving, and I call on our own neighbourhood police to do the same.

"Efforts have been made by police, but I feel this needs to be intensified moving forward.

"Of course, the blame for this kind of undesirable activity falls squarely with those responsible. I am calling on those who are undertaking these actions to stop and think about the damage they are causing. They need to refrain, as they could all to easily find themselves without a licence, or with a serious black mark against their name in the future.

"And even worse is the potential for someone to be seriously hurt or injured - these individuals need to have act with respect and consider the consequences of their actions."