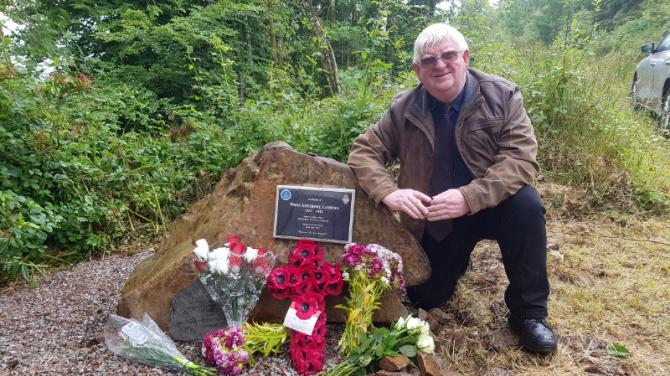 A STRABANE man has just returned from Scotland where he took part in a special commemoration to mark the 80th anniversary of his aunt during World War II.

Liam Canning, formerly of Ballindrait but living in Strabane for the past 50 years, attended the memoral service which was organised by the Inveraray and District Branch of the Royal British Legion.

The ceremony was held to commemorate the 80th anniversaray of the death of Gertrude Canning, Liam’s aunt who was murdered in Inveraray 80 years ago on June 30, 1942.

Gertrude, aged 20, was a serving member of the Woman’s Royal Naval Service (WRNS).

The event took place at ‘Gertrude’s memorial stone' located close to the quaint and idyllic Scottish town in the Argyll and Bute region of Scotland.

This stone had been dedicated to Gertrude’s memory in a ceremony held ten years on the occasion of the 70th anniversary of her death.

"The ceremony was marked with a short religious service at the stone led by the Reverend Dorothy Wallace, a Minister from the Church of Scotland and Chaplain to the Inveraray and District Branch of the Legion," Liam explained.

Those gathered were also addressed by Liam who offered a brief insight into her short life and subsequent tracic passing.

A Poppy cross was then laid at the stone by on behalf of the Inveraray Legion by Mrs Emma Irons.

This was followed by a number of other floral tributes from those who attended the ceremony to show their respect for the late Gertrude and her family.

A small bouquet of flowers was also placed at the stone by Liam as part of the proceedings on behalf of the Canning family and its extended network.

Liam added: "I have been rresearching Gertrude’s early life and the circumstances associated with her death over the past ten years, and I'm currently in the latter stages of completing a book telling Gertrude’s story.

"It is hoped this will be published by the end of this year or early in 2023."

Gertrude is buried at Ballybogan Graveyard between Lifford and Castlefinn.