Online programme of talks to complement Battle of Knockavoe exhibition 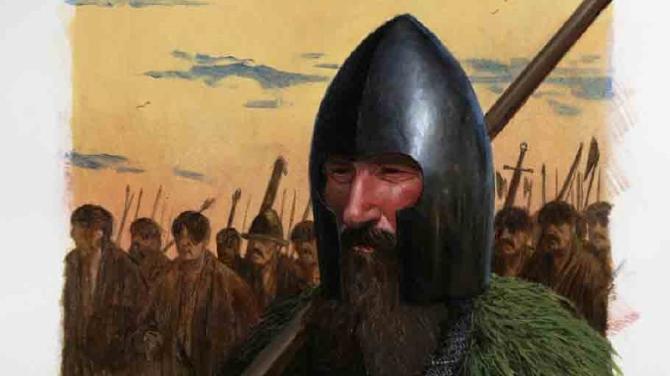 THERE will be a number of online events taking place part of the Battle of Knockavoe exhibition which is currently on display in the Alley Theatre.

The exhibition will run in the Strabane venue until July 22 and commemorates the 500th anniversary of the battle in which 900 mostly local men, under the leadership of Con O’Neill, were killed in a brutal surprise attack by Manus O’Donnell.

To further explore the exhibition, Derry City and Strabane District Council’s Museum and Heritage team have organised a series of online events.

The first will take place tonight (Wednesday) and will be a talk about the incredible art that is featured in the exhibition.

Local artist, Seán Ó’Brógáin, will discuss his inspiration and work included in the exhibition, as well as his wider portfolio and knowledge.

"Through his knowledge and research he has recreated scenes which could not be produced otherwise and really illustrated not only the violence and brutality of the battle, but also life in late Medieval Ireland.

"As well as Seán’s artwork we also have to thank Oireas Historical Services and Imvizar AR, who have provided an opportunity to immerse ourselves in the reality of those who lived here 500 years ago through life size figures and Augmented Reality.

“We’ve been familiar with Seán’s work for a while now but his portfolio extends far beyond Irish history.

"He has illustrated multiple Osprey publications around Greek and Roman history and is one of the highest regarded illustrators in the business, and is also a fantastic artist in his own right.

"We want to talk through his work and inspiration behind the exhibition through an online webinar and we’d love members of the public to join us and ask Séan questions as well.”

This online talk with Seán Ó’Brógáin will take place at 7.30pm and attendees can register via the Alley Theatre or Tower Museum Facebook pages.

In addition to the above event, tomorrow (Thursday), the Tower Museum Facebook and YouTube channels will be screening a talk with local historian Michael Kennedy on the work of William Collins, the 18th Century warrior poet of Strabane who fought in the American Civil War and wrote the iconic love poem ‘At the Foot of Knockavoe’.

On July 20 at 7.30pm there will also be a screening of a demonstration from Oireas Historical Services on the incredible historical reproduction figures from the period that you can view in the exhibition, including a Gallowglass and Kern.

Ronan added: “We are really looking forward to these online events which we think will give people an even more in depth look into the Battle of Knockavoe, the work behind the scenes for the exhibition, and the wider context.”

For more on the Battle of Knockavoe exhibition, visit: