Disintegrating roundabout repairs to be progressed 'within the next three months' 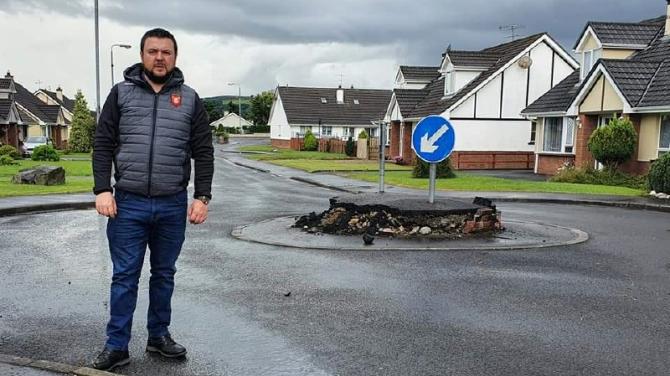 IT could be three months before a disintegrating roundabout in Castlederg has been repaired, the Department for Infrastructure (DfI) has warned.

The roundabout at Stoney Heights in the town has been an issue of concern for several years, and this week a local councillor accused the department of "broken promises" as it has not yet been replaced.

Sinn Féin's Ruairí McHugh said he had been given an assurance last summer that the "eyesore" would be replaced.

“Back in 2019, I first held a site meeting with Roads Service about the disintegrating state of this mini-roundabout in Stoney Heights," he explained.

“I was subsequently given confirmation in July 2021 that the damaged roundabout, which has become a complete eyesore, would be removed completely to be replaced by a white thermoplastic roundabout in its place.

“Despite repeated requests, I am still waiting on a confirmation date of when this work will be carried out.

“In the intervening period, the other two roundabouts in the residential development have similarly deteriorated and now also require replacement.

“The broken promises by Roads Services are not good enough and are a cause of great frustration to local residents."

He added: "Roads Service needs to act on this and also in relation to representations I have been making to it about the issue of untreated weeds in estates throughout Castlederg.

“I have also been on to the Housing Executive about grass not being cut is areas of its maintenance responsibility and look forward to this work also being progressed.”

The department has said a work instruction order was issued on October 18, 2021 for the work, but in line with its 'Limited Service' policy, it is deemed 'low priority' and will be undertaken "as and when resources are available."

The delay has also been raised with the Infrastructure Minister, John O'Dowd, via a priority written Assembly question by West Tyrone Sinn Féin MLA., Maolíosa McHugh.

He had asked his party colleague when the mini roundabouts in Stoney Heights, Castlederg will be replaced."

In response, the Roads Minister indicated that work will be "progressed within the next three months".

"My department is proposing to remove one of the damaged roundabouts and replace it with a raised circle in thermoplastic material," Mr O'Dowd said.

"Traffic speeds will then be monitored before a decision regarding the possible removal of the remaining damaged roundabouts is taken.

"My officials advise that the necessary works are expected to be progressed within the next three months."