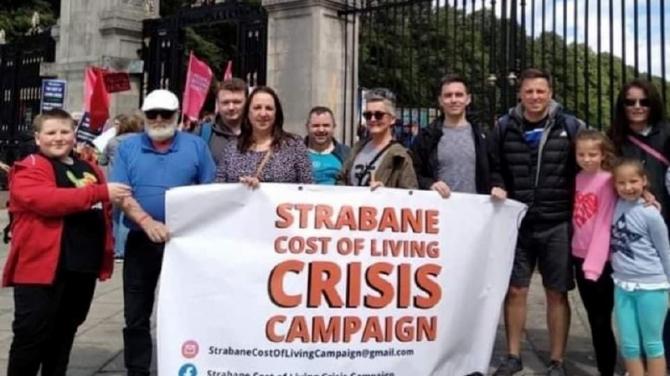 CAMPAIGNERS from Strabane were among those who took part in a major day of action on the cost of living crisis.

Saturday's rally at Stormont came on the back of localised action in towns and cities across the province, in conjunction with major protests in London and Dublin, when thousands of families, community groups, volunteers, political representatives, workers and trade unions took to the streets in the fightback against the escalating crisis.

The rally, organised by the Northern Ireland committee of the Irish Congress of Trade Unions (ICTU), involved 24 trade unions with organisers  demanding a range of immediate measures to tackle the crippling impact of rising bills on already hard pressed families and individuals..

Among those in attendance were members of the recently established Strabane Cost of Living Crisis Campaign Group.

Speaking on Saturday, ICTU secretary Owen Reidy said people were "fed up" with the inaction of Stormont and Westminster.

"We have a government in Westminster that clearly puts parties before people and we have no government, no executive, here in Northern Ireland," he said.

"We really believe now is the time for action, in the summer months before we get to the winter, because obviously inflation is at 9 per cent, it is going to go double digits soon."

Mr Reidy said this was part of a six-month campaign to "bring together, workers, trade union members, community groups and others to demand action on the cost-of-living crisis."